The story of the game depicts the struggles of people surviving in a fictional "intraglobular world" menaced by an impending destruction, mysterious warped creatures, and different factions warring against each other. The game focuses successively on the viewpoints of four main protagonists.

Critics of the game were relatively positive, with high praises of its graphics and art direction but more mixed feelings for its complex and atypical gameplay.

Code Age Commanders is an action role-playing game divided in missions, in which the goal is to fight enemies called "Coded" to reach a certain area of the map, where a boss must sometimes be defeated. The player controls one character while other allies are computer-controlled and must not die for the mission to be successful.[1] Between two missions, the player can select in a menu numerous optional cut scenes to watch and which reveal the memories of the Coded defeated,[2] while stages already completed can be re-explored. The game features four successive main playable characters, and items and skills learned by one is each time passed to the next.[3] 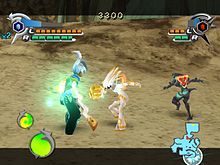 Weapons are equipped on both hands of the characters and are used with the circle and cross buttons. Pressing both buttons in succession is necessary to execute combos. The other buttons are used to lock focus onto an enemy, guard, dash, or manually change the camera angle. The number of attacks and blocks is limited by an energy meter for each arm, which decreases after each move but replenishes with time.[2]

A third meter increases after each combo and allows when maxed out to perform a "Code Drive" attack. Executed with the triangle button, a Code Drive triggers a brief close-up sequence in which a blue circle appears around the character. If the player presses a second button before the circle shifts to red, a powerful special attack will be unleashed. If the enemy blocks the Code Drive, a second, shorter close-up sequence is triggered. Enemies can also perform Code Drives, in which case the player's button press allows for protection rather than attack. Executing Code Drives frequently can cause the weapon used to upgrade, or the character to go into a "Code Crisis"; a mode which reduces speed and renders immune to attack, but slowly drains hit points.[3]

In addition to Coded, enemy creatures include "Otellos", which can either be defeated normally or be absorbed, mutating one of the protagonist's arm into a new form with new abilities. Depending on their types, absorbed Otellos can be used to fight, heal or be shot as a projectile weapon.[1] Multiple Otellos can be absorbed into each arm and switched for usage, although gathering too many may result in an "Overload" mode in which attack power is boosted; but one Otello must be dropped quickly or the character's hit points will decrease steadily and continually.[3]

Characters do not level up in a way similar to standard role-playing games; instead, stats evolve according to two coexistent systems. The "Self Evolution System" alters stats and skills depending on their usage during battle: for instance, a repeated use of left-handed attacks increases the character's left arm strength, while running around often increases their speed.[1] The second system is the "Code Extension" mode, in which Code Points can be spent on either of the two arms or up to four body slots to increase their stats or acquire new skills.[2] Code Points are earned after each mission in amounts that depend on the quantity of "Dropped Code" collected from defeated enemies, as well as mission clear time, and damage done and taken.[4] When replaying completed stages, the amount of Code Points earned is the difference between the player's highest past score for the mission and the new score obtained.[3]

Code Age Commanders is set in an "intraglobular world" (球内世界, kyuunai sekai?), a fictional hollow world similar to a Dyson sphere, with people living on its internal surface. The center of the sphere is occupied by the "Central Code", a spherical structure which goes through a transformation called "Reborn" about every ten thousand years, destroying all life on the globe and allowing for the birth of a new one.[3]

The game begins near the end of a Central Code cycle, while mankind has learned about the impending disaster and built "Arks", flying stations intended to float in the sky and house most of them in a deep sleep state for the duration of the Reborn. The operation works for one hundred years before objects falling from the Central Code hit the Arks and cause them to crash to the surface. Its passengers die or awake, now at the mercy of those who remained on the ground as well as the Otellos; a new, warped species which arose from the dropped pieces of the Central Code. The Otellos seek humans to turn them into mindless puppets named "Coded", although the mutation fails on people from the Arks and results in free and extremely evolved hybrids called "Warheads".[3][5]

Knowing this, several humans seek Otellos voluntarily to become Warheads and try to protect mankind with the powers gained from the mutation. Several armed factions form with differing points of view on the way to save the world, while the Reborn still has not been completed.[6]

The events of the game unfolds successively from the viewpoints of four different Warhead protagonists. The first one is Gene, a young man who becomes amnesic after the Arks accident. He is the son of professor Alvin, one of the builders of the Arks, who disappeared some time after the accident.[6] While searching for his sister Aliz kidnapped by a strange creature, Gene is mutated into a Warhead and watches his arm turning into a weapon during a battle against some Otellos.[5] He is assisted by a small floating companion named Pake;[7] and is later joined by the Warhead Kilroy, who was an assistant to professor Alvin; and Meme, a mysterious but determined, optimistic young female Warhead.[8]

The second protagonist, Fiona, is a soldier of the White Army of Guinevere, who saved her life. Commander Guinevere, a Warhead, was a female scientist who worked in the Arks with professor Alvin. Fiona is initially very loyal to Guinevere, but becomes more reluctant following the death of a friend and the commander's changing, more dominating behavior.[6]

The third protagonist is Gerald, a member of the Black Army of Sullivan. Also very loyal, Gerald nevertheless wonders why people do not unite to face the common threat represented by the Otellos. Commander Sullivan was another companion of professor Alvin and Guinevere, and also became a Warhead. His divergence of opinions with the White Army forced him to gather his own distinct army.[6] The fourth and final protagonist is Haze Healy, a member of the Keepers; a faction opposed to both White and Black Armies.[3]

Conceptual work by Yusuke Naora, the producer of the Code Age franchise, began in 2002; and Code Age Commanders was officially announced in the April 2005 edition of the Japanese gaming magazine Famitsu.[5][7] The development team was nicknamed "Warhead" and specifically assembled for the game, with its lead developers Yusuke Naora and Toshiyuki Itahana belonging to the art field rather than project management.[9] Several connections to the mobile phone game Code Age Brawls and the manga Code Age Archives were put throughout the game, so that information learnt from it could be used by players and readers of the other installments to understand the full picture.[7]

The focus on customization features in the game was designed by Naora to appeal to the American market.[7] A trailer of the game was featured at the Los Angeles E3 in 2005, although Naora later commented that a North American release date was not yet set as there were concerns about competing with the soon-to-be-released PlayStation 3.[10][11] While the gaming website RPGamer reported at one point a 2006 release in North America, the game was eventually released only in Japan.[12]

The score for the game was composed primarily by Kumi Tanioka, with Yasuhiro Yamanaka penning three tracks and J-Pop singer Kou Shibasaki writing and performing the theme song titled "Memory Pocket -Memopoke-".[13][14] The non-optional event scenes of the game are fully voiced.[7] The Code Age Commanders Original Soundtrack, which does not contain "Memory Pocket", was published by Square Enix on October 19, 2005 in Japan. It spans two discs and 80 tracks, covering a duration of 2 hours and 28 minutes.[13] "Memory Pocket" was released as the B-side to Shibasaki's single Sweet Mom by Universal Music Group on October 5, 2005 in Japan, and was included in her second album Hitori Asobi published by Universal Music Group on 2006-12-14 in Japan.[14]

Code Age Commanders sold 37,000 units in its first week of release in Japan, a strong start for a new franchise; debuting at number two in the charts behind Dragon Ball Z: Budokai Tenkaichi.[17] The game scored 32 out of 40 in the Japanese gaming magazine Famitsu; 7.5 out of 10 in the American Play Magazine; and 78 out of 100 on the gaming website GameBrink.Com.[4][15][16] Nevertheless, the gaming site Siliconera reported overall low sales in Japan and attributed the absence of a North American release to this lukewarm response.[10]

GameBrink.Com highly praised the quality of the graphics and animation of the game, and compared them to those of the Kingdom Hearts titles. The site greatly lauded the music and sound effects, stating that they set the mood well and tie in with the visuals; and comparing their style to that of "Final Fantasy and Phantasy Star mixed together". Siliconera also considered the character design interesting and original, although they felt the textures were "blocky sort" and the environments consisted mostly of wide fields.[4][10]

However, GameBrink.Com felt that the gameplay, user-friendly even to non-Japanese players, consists of too much repetitive button mashing despite featuring characters with different abilities. The Code Extension mode was considered imperfectly implemented, seeming as if it were "tacked on […] late in development", being totally optional yet difficult not to use to survive in the later missions. Calling the gameplay "shallow", the site stated that "the soundtrack would probably be a better purchase than the actual game".[4] On its part, Siliconera noted that while the gameplay may seem complex for using every button on the controller, thirty minutes were enough to grasp how to play the game. The site felt the missions were designed with good pacing and replayability value, but added that hardcore role-playing game fans could dislike the lack of exploration, puzzle, and standard role-playing game principles.[10]

The storyline was also criticized by GameBrink.Com for feeling secondary to the gameplay yet being told in long and numerous cut scenes; their amount was compared to that of the Xenosaga series.[4] On the contrary, Siliconera praised the story and did not report any issue concerning it, although it regretted that playing and reading the other installments of the franchise was necessary for a thorough understanding of all plot points.[10]