Cleckheaton bus station serves the town of Cleckheaton, West Yorkshire, England. The station is owned and maintained by Metro (WYPTE)

The station is situated in Cleckheaton Town Centre with entrances from Dewsbury Road and Greenside.

The bus station was rebuilt by Metro in April 2005 replacing the previous Arriva Yorkshire owned site. 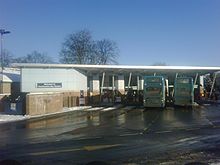 Buses run from the bus station around the Heavy Woollen District (North Kirklees) and as far as Huddersfield, Halifax, Bradford, Leeds and Wakefield.

The bus services that use Cleckheaton bus station and their stand letter are shown below[1]: (Places in bold are where services terminate)