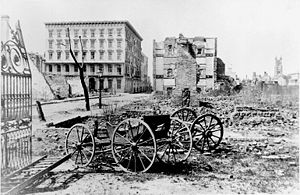 The ruins of Mills House and nearby buildings, Charleston A shell-damaged carriage and the remains of a brick chimney in the foreground. 1865. 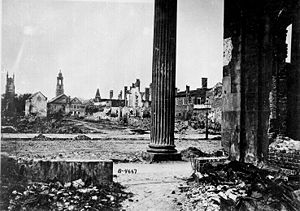 Charleston, South Carolina, was a hotbed of secession at the start of the American Civil War and an important Atlantic Ocean port city for the fledgling Confederate States of America. The first shots of the Civil War were fired at a Federal ship entering Charleston Harbor. Later, the bombardment of Fort Sumter triggered a massive call for Federal troops to put down the rebellion. Although the city and its surrounding fortifications were repeatedly targeted by the Union Army and Navy, Charleston did not fall to Federal forces until the last months of the war.

Charleston ranked as the 22nd largest city in the United States according to the 1860 Census, with a population of 40,522. Long feared as a target for foreign invasion, the harbor was ringed with a series of forts, bastions, and floating batteries to protect it from an enemy fleet.

On December 20, 1860, the South Carolina General Assembly made the state the first to ever secede from the Union. From the time of the Missouri Compromise in 1820, the defense of slavery, more than tariffs or states rights, was the main factor contributing to sectionalism in South Carolina.[1] The secession convention declared:

We affirm that these ends for which this Government was instituted have been defeated, and the Government itself has been made destructive of them by the action of the non-slaveholding States. Those States have assume the right of deciding upon the propriety of our domestic institutions; and have denied the right of property established in fifteen of the States and recognized by the Constitution; they have denounced as sinful the institution of slavery; they have permitted open establishment among them of societies, whose avowed object is to disturb the peace and to eloign the property of the citizens of other States. They have encouraged and assisted thousands of our slaves to leave their homes; and those who remain, have been incited by emissaries, books and pictures to servile insurrection."[2]

At the end of the month, South Carolina militia seized Castle Pinckney and the Charleston Arsenal and their supplies of arms and ammunition.

On January 9, 1861, Citadel cadets fired the first shots of the Civil War when they opened fire on the Union ship Star of the West as it was entering Charleston's harbor. It had been sent by the Federal government with relief supplies for the garrison of Fort Sumter. On April 12, shore batteries under the command of General Pierre G. T. Beauregard opened fire on the Union-held Fort Sumter in the harbor. After a 34-hour bombardment, Major Robert Anderson surrendered the fort.

Throughout much of the war, cadets from the Citadel, South Carolina's military institute, continued to aid the Confederate army by helping drill recruits, manufacture ammunition, protect arms depots, and guard Union prisoners.

In June 1862, a small but important battle at Secessionville, in modern-day James Island, resulted in Union forces being repulsed by a much smaller Confederate force. The victory provided the city with a propaganda coup and saved it from the threat of land invasion. Not until the latter stage of the war would the city be under such threat again. 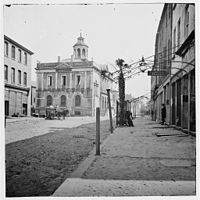 View of Post Office, East Bay Street, Charleston, 1865, showing the last palmetto left in the city after the bombardment

As many Southern port cities had been closed off by the Union blockade, Charleston became an important center for blockade running. Repeated attempts by the U.S. Navy to take Charleston and/or batter its defenses into the ground proved fruitless, including the Stone Fleet. The city resisted occupation for the majority of the war.

In 1863, the Union began an offensive campaign against the defenses of Charleston Harbor, beginning with a combined sea-land engagement. The naval bombardment accomplished little however, and the land forces were never put ashore. By summer of 1863, the Union turned its attention to Battery Wagner on Morris Island, which guarded the harbor entrance from the southwest. In the First and Second battles of Fort Wagner, Union forces suffered heavy losses in a failed attempt to capture the fort. A siege however resulted in Confederate abandonment of the fort by September of that year. A Union attempt to recapture Fort Sumter by a naval raiding party also failed badly, but the fort was successively reduced to rubble by bombardment from shore batteries after the capture of Morris Island.

With the development of newer, longer range artillery, and as Union forces were able to place batteries ever closer to the city, a bombardment began in late 1863 that continued off and on for more than a year. The accumulated effects of this bombardment would destroy much of Charleston. The Union launched a coordinated series of attacks on the city in early July 1864, including an amphibious assault on Ft. Johnson and an invasion of Johns Island. These attacks all failed, but continued to wear down the city's defenders.

Charleston Harbor was also the site of the first successful submarine attack in history on February 17, 1864, when the H.L. Hunley made a daring night attack on the USS Housatonic.[3]. Although the Hunley survived the attack, she foundered and sank while returning from her mission, thus ending the threat to the Union blockade.

As Gen. Sherman marched through South Carolina, the situation for Charleston became ever more precarious. On February 15, 1865, Gen. Beauregard ordered the evacuation of remaining Confederate forces. On February 18, the mayor surrendered the city to Union general Alexander Schimmelfennig; and Union troops finally moved into the city, taking control of many sites, such as the United States Arsenal (which the Confederate army had seized at the outbreak of the war). 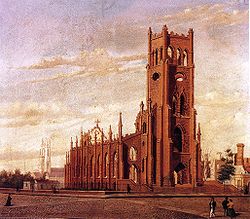 After the eventual and long-toiled defeat of the Confederacy, Federal forces remained in Charleston during the city's reconstruction.