The China Dragon (Chinese: 中国龙队) are a professional ice hockey team based in Shanghai, China, and a member of Asia League Ice Hockey. The team was formed in 1954 as two different clubs, Harbin and Qiqihar, as part of the China League. In 2004 the clubs joined Asia League Ice Hockey and in 2007 they merged into a single club, China Sharks, backed by the National Hockey League's San Jose Sharks, for financial reasons. The team was renamed the China Dragon in 2009 when San Jose pulled out.

The China Dragon began their history as two separate teams, both playing in China.

Changchun Fuao was founded as Qiqihar in 1954 and captured 28 championships in the China League. Their mascot was the snow leopard.[1] The team joined Asia League Ice Hockey in the 2004-2005 season. They played out of the Qiqihar Gymnasium. The season was opened in the two Chinese rinks.[2] They played 42 games in their initial season only winning a single game and finished in last place with four points. Their only win came against fellow Chinese team, Harbin. They gave up a staggering 326 goals while only managing to score 53.[3] Fu Nan led his team in scoring with eight goals. Liu Henan had eight assists and 14 points.[4] The team also gave up the most short handed goals while being the only team who didn't score any.[5] The team rotated coaches from game to game rather than have a single coach lead the team for the season.[6] The team had three import players on the roster, but only two of them each played a single game during the season.[4]

A bench-clearing brawl against the Nikko Ice Bucks on December 3, 2006 led to a league record 13 suspensions

As part of the Nordic Vikings entry into the league, Qiqihar sent three players to play on their team for the 2005-2006 season. In return, the Vikings provided three players, a coach and an official to Qiqihar.[7] While improving on their first year's showing, the team still finished in last place with 11 points. With the schedule reduced to 38 games, the team gave up 278 goals while scoring 61. Their success came mainly against Harbin, but they managed an overtime loss to Kangwon Land from South Korea who were playing in their first season.[8] The team stopped fielding their Swedish exchange players after their November 28, 2005 game against Anyang Halla. However, Anders Westerlund continued to coach the team until the end of the season.[9] The team was led in scoring by Jayden Der with 11 goals and 15 points. Guo Xin had the most assists with nine.[10] For the second year in a row the team gave up the most short handed goals while being the only team not to score one.[11]

There were several changes to the team in the 2006-2007 season. The Nordic Vikings left the league which means the player and staff that were exchanged were no longer available to them. The team also gained new sponsorship. Their name was changed to "Changchun Fuao" and they moved to Changchun, the future site of the 2007 Asian Winter Games.[12] The league reduced the amount of games played to 34. Changchun Fuao slid backwards from the previous season and only won 2 games. Both wins came against Hose, formerly Harbin, and they finished with six points.[13] On December 3, Changchun was involved in a bench-clearing brawl against the Nikko Ice Bucks. Five Ice Bucks players received game misconduct penalties while seven Changchun players received the same and one Changchun player, Fu Nan, received a match penalty.[14] The league later suspended all of the penalized players for one game, except for Fu who received a two game suspension.[15] Lie Henan again led the team with 20 points and also led scoring with 13. Fu Nan led with nine assists.[16] Fuao did improve in the short handed goals department. They gave up the most of any team, but managed to score six during the season which put them ahead of the Nikko Ice Bucks who only scored three.[17] With the departure of their year long coach from Sweden, the team was back to switching coaches during the season.[18] Due to financial difficulty the team merged with Hosa at the end of the 2006-2007 season to form the China Sharks.

Like Qiqihar, Hosa was also formed in 1954 with the name Harbin and took part in the China League. They had the most championship wins in Chinese hockey. Harbin took their name from Harbin City and played out of the Harbin Ice Hockey Rink. They joined Asia League Ice Hockey in the 2004-2005 season.[1] In their first season of 42 games they finished in seventh place with 26 points. They had seven wins, including two against the Nikko Ice Bucks. They scored 91 goals while allowing 225.[3] Unlike Qiqihar, Harbin used import players on their team. Tomas Hruby finished sixth in the league and led the team with 23 goals, 19 assists and 42 points.[4] Harbin also led the league in short handed goals with nine.[5] Captain Yin Kai was absent from two games on December 4[19] and 7[20] during which time the team played with no captain on the ice. On December 11, 2004 Wang Dahai began filling the position of captain.[21] In contrast to Qiqihar, Harbin maintained the same coach through the season.[6]

In their second season, 2005–2006, Harbin again won seven of their 38 games. Including three games against new Korean entry, Kangwon Land. They scored 68 goals while allowing 198.[8] They also received three players, a coach and official from the Nordic Vikings organization.[7] The Swedish coach took over for the year and their coach from the previous year worked as an assistant coach.[1] Yin Kai returned to the Harbin line-up on November 23, 2005[22] and after a couple of games he resumed the position of captain on December 1.[23] Harbin removed the Swedish players from their roster after the December 13 game against the Nippon Paper Cranes.[24] Du Chao was the team leader with 13 goals and 18 points. Wang Dahai recorded 13 assists.[10] After the previous year's strong showing in short handed goals, Harbin finished near the bottom with only 2.[11]

Harbin was sponsored by the Hosa sporting goods company in the 2006-2007 season. As part of the sponsorship deal the team moved to Beijing and changed their name to Hosa. It was announced that they would still play some home games in Harbin. Their new home was the Hosa Skating Center.[25] Of the 34 games that Hosa played they won six and finished in seventh place with 19 points, scoring 86 goals while allowing 188. They were swept by three of the four Japanese teams.[13] With the departure of their Swedish imports, Hosa brought Tomas Hruby back to the roster. He led the team with 22 goals again finishing sixth in the league. Juri Hubacek finished sixth in assists with 35 and eight in points overall with 51. Hruby finished in eighth place with 50 points.[16] For the second time in their three year history in the league the team was leading in the league in short handed goals, tied for 10 with two other teams.[17] The team played six of their 17 home games in Harbin.[18] At the end of the season they merged with Chanchun Fuao to form the China Sharks.

Along with a new name, the team took a new logo

Under the management of Chinese Ice Hockey Association, players were selected from the two teams to form the new team, originally sponsored by Hosa Sports. As a result of negotiation between the Chinese Association and the San Jose Sharks, the NHL team agreed to send five players and three coaches to the Chinese team, in exchange for the team naming rights. The team's logo is similar to the Cleveland Barons, a previous affiliate of the Sharks.

By merging the only two professional hockey clubs in China, the China Sharks essentially became the Chinese national team which would compete in the Asia League Ice Hockey and eventually in the Olympics. Since this sounded like a truly unique experience to teach and spread the game of hockey into Asia while expanding into a new market, the parent company of the San Jose Sharks, Silicon Valley Sports and Entertainment, made a decision to send players and coaches to China prior to the 2007-08 season.[26]

The partnership between the San Jose Sharks and China’s national team happened largely through the work of China Sharks’ GM Chris Collins. While working for the San Jose Sharks, Collins investigated China’s athletic market and was able to convince San Jose Sharks’ President Greg Jamison that the club should invest in China. After the partnership became official, Collins soon moved to China and became GM of the new club.[27] The team now has two major offices in Shanghai which employ marketing and operations professionals.[28]

Though the team played its first season in Beijing, it moved into a new arena called Songjiang Stadium in the Songjiang District of Shanghai for the 2008-09 season. On October 11, 2008 the China Sharks played the first home game in their new arena, beating the Seibu Prince Rabbits by a score of 3-1. Prior to this, the team held its 2008-09 training camp in the northern Chinese city of Suihua.[26] Also before the 2008-09 season, three China Sharks players trained in the United States at the San Jose Sharks rookie training camp in Oakland, California. Cui Zhinan, Lui Heenan, and Wang Jiang, all came to spread awareness of the team and skate with the club each afternoon. The men stayed for different periods of time, with some staying as long as ten days.[27]

The San Jose Sharks’ decision to partner with the Chinese national team was not the first initiative by an NHL team to spread hockey into Asia. In 2006, the New York Islanders helped launch Project Hope, an initiative which included building several rinks, providing hockey equipment, coaching, and providing English classes to those living in the Heilongjiang Province of China.[26] Like the New York Islanders, the San Jose Sharks plan to work with the Chinese government and local investors to build youth and industrial leagues across China. Also a part of this plan would be to help develop rinks and other hockey venues to encourage the game.[28] While the game has been somewhat popular in northern China, the game is relatively unknown in southern parts of the country. Part of these initiatives will be to help spread hockey throughout all of China.[27] At the current time, the New York Islanders and the San Jose Sharks are the only two NHL teams with a presence in China.

The China Sharks’ eventual goal is to prepare its young Chinese players to eventually compete in the winter Olympics. However, the level of play in China is still significantly lower than in other countries. In 2008-09, the China Sharks finished near the bottom of the Asia League Ice Hockey, winning only five of their thirty-six regular-season games.[29] 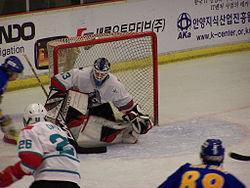 China Sharks goalie Wade Flaherty prepares to make a stop in a game against the Anyang Halla on November 15, 2008. Flaherty is wearing the team's away jersey.