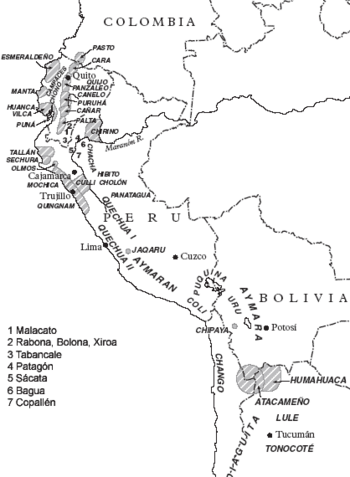 The Marañón River basin between Peru and Ecuador, at a low point in the Andes which made it an attractive location for trade between the Inca Empire and the Amazon basin, once harbored numerous languages which have been poorly attested, or not attested at all. Those of the middle reaches of the river, above the Amazon basin, were replaced in historical times by Aguaruna, a Jivaroan language from the Amazon which is still spoken there. The languages further upriver are difficult to identify, due to lack of data. The region was multilingual at the time of the Conquest, and the people largely switched to Spanish rather than to Quechua, though Quechua also expanded during Colonial times.

On the Ecuadorian side of the river, in the province of Loja, were Palta, Malacato, Rabona, Bolona, and Xiroa. Historical sources suggest these were closely related, and there is some evidence that Palta (see) was a Jivaroan language. Indeed, the name Xiroa may be a variant of Jivaro. Rabona is attested by a few words, some of which seem to be Jivaroan, but others of which appear to be Candoshí; since these are plant names, they say little about the classification of the language, and Andelaar (2004:397) leaves it unclassified. Bolona is essentially unattested.

North of the basin were Puruhá (scarcely attested), Cañar (known primarily from characteristic place names), Panzaleo (sometimes classified as Paezan), Caranqui (until the 18th century, seemingly Barbacoan), and Pasto (Barbacoan). Apart possibly from Panzaleo, these languages have elements in common, such as a final syllable -pud and onsets mwe-, pwe-, bwe-. Those suggest that they may have been related, and possibly were all Barbacoan. Adelaar (2004:397) finds this more likely than a proposal that Puruhá and Cañar were Chimuan languages (see).

On the Peruvian side of the river, and further up in the Andes where it enters Peru, there were also numerous languages. Apart from Mochica and Cholón, the languages of northern Peru are largely unrecorded; the attested Marañón languages are Patagón (Patagón de Perico), Bagua (Patagón de Bagua), Chacha (Chachapoya), Copallén, Tabancale, Chirino, and Sácata (Chillao).

Patagón (Patagón de Perico, not to be confused with the Chon languages of Patagonia): Four words are recorded, tuná 'water', anás 'maize', viue 'firewood', coará 'sheep' (evidently the word for 'sloth'). These suggest that Patagón was a Cariban language, and therefore, like Aguaruna, from the Amazon (Adelaar 2004:405–406).

Chacha is the name sometimes given to the language of the Chachapoya people. The Chachapoya, originally from the region of Kuelap to the east of the Marañón, were conquered by the Inca shortly before the Spanish conquest, and many were deported after the Inca civil war. They sided with the Spanish, and achieved independence for a time, but were then deported again by the Spanish, where most died of introduced disease. There language is essentially unattested apart from toponyms and several hundred family names. Family names are mostly short and have been distorted through adaptation to Quechua; the only one which can be identified is Oc or Occ [ox], which according to oral history means 'puma' or 'bear' (Adelaar 2004:407).

Chachapoya toponyms ending in -gach(e), -gat(e), -gote are found near water. Between the town of Cajamarca and the Marañón river is a similar typonymic element, attested variously as -cat(e), -cot(e), -gat(e), -got(e), with -cat found further across a wider area of northern Peru. This may be the Cholón word for water; the place name Salcot or Zalcot is found three times in Cajamarca, as well as being the name of a Cholón village meaning 'black water'.

Five words are recorded: yema 'water', moa 'maize', oyme 'firewood', lalaque [lalake] 'fire', tie 'house'. These do not correspond to any known language or family, so Tabancale is unclassified and potentially a language isolate.

The Chirino were one of the principal peoples of the area. Based on the four words which were recorded, yungo 'water', yugato 'maize', xumás 'firewood', paxquiro [paʃˈkiɾo] 'grass', their language would appear to be related to Candoshi (Torero 1993, Adelaar 2004:406).

Three words of the language of Sácata (Zácata), apparently that of the Chillao people, are recorded: unga 'water', umague [umaɡe] 'maize', chichache 'fire'. Connections have been suggested with Candoshí (the word for water is similar to that of Chinino) and Arawakan, but the evidence is insufficient.