Indigenous languages of the Americas

Indigenous languages of the Americas

Indigenous languages of the Americas are spoken by indigenous peoples from Alaska and Greenland to the southern tip of South America, encompassing the land masses which constitute the Americas. These indigenous languages consist of dozens of distinct language families as well as many language isolates and unclassified languages. Many proposals to group these into higher-level families have been made, such as in three macrofamilies of Eskimo–Aleut, Na-Dene, and Amerind, though this scheme is rejected by nearly all specialists.[1] According to UNESCO, most of the indigenous American languages in North America are critically endangered, and many of them are already extinct.[2]

Thousands of languages were spoken in North and South America prior to first contact with Europeans between the beginning of the 11th century (Norwegian settlement of Greenland and attempted settlement of Labrador and Newfoundland) and the end of the 15th century (the voyages of Christopher Columbus). Several indigenous languages of the Americas had also developed their own writing systems, including the Mayan languages and Nahuatl. The indigenous languages of the Americas had widely varying demographics, from the Quechua languages, Aymara, Guarani, and Nahuatl, which had millions of active speakers, to many languages with only several hundred speakers. After pre-Columbian times, several indigenous creole languages also developed in the Americas from European languages.

The European colonizers and their successor states had widely varying attitudes towards Native American languages. In Brazil, friars actively learned and promoted the Tupi language. In many Latin American colonies, Spanish missionaries often preached to the natives in local languages. In the American colonies, John Eliot of Massachusetts translated the Bible into the Massachusett language, also called Wampanoag, Massachusett or Natick (1661–1663; the first Bible printed in North America). However, the Europeans also actively suppressed indigenous American languages. As a result, indigenous American languages suffered from cultural suppression and loss of speakers. By the 18th and 19th centuries, Spanish, English, Portuguese, French, and Dutch, brought to the Americas by European settlers and administrators, had become the official or national languages of modern nation-states of the Americas.

Today, even though many indigenous languages have become critically endangered, others are now rigorously spoken. Several even have official status, such as Guaraní in Paraguay, though in other cases official status is limited to certain regions where languages are spoken, and even if enshrined in constitutions has little de facto official use: examples of this are the status of Quechua in Peru and Aymara in Bolivia, where in practice it is Spanish that remains entirely dominant in all formal contexts. In the Arctic region, Greenland adopted Kalaallisut as its sole official language in 2009. In the United States, the Navajo language is the most spoken Native American language, with over 200,000 speakers in the Southwestern United States. The language was used by the Navajo Code Talkers during World War II to transmit secret military messages, which both the Germans and Japanese had never deciphered. Today, governments, universities, and indigenous peoples are continuing to aim for the preservation and revitalization of indigenous American languages.

Further information: Classification schemes for indigenous languages of the Americas 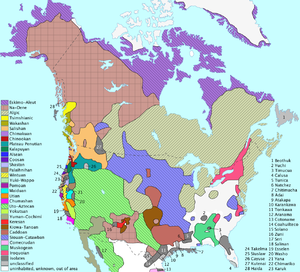 There are approximately 296 spoken (or formerly spoken) indigenous languages north of Mexico, 269 of which are grouped into 29 families (the remaining 27 languages are either isolates or unclassified). The Na–Dené, Algic, and Uto-Aztecan families are the largest in terms of number of languages. Uto-Aztecan has the most speakers (1.95 million) if the languages in Mexico are considered (mostly due to 1.5 million speakers of Nahuatl); Na–Dene comes in second with approximately 200,000 speakers (nearly 180,000 of these are speakers of Navajo), and Algic in third with about 180,000 speakers (mainly Cree and Ojibwe). Na–Dené and Algic have the widest geographic distributions: Algic currently spans from northeastern Canada across much of the continent down to northeastern Mexico (due to later migrations of the Kickapoo) with two outliers in California (Yurok and Wiyot); Na–Dené spans from Alaska and western Canada through Washington, Oregon, and California to the U.S. Southwest and northern Mexico (with one outlier in the Plains). Several families consist of only 2 or 3 languages. Demonstrating genetic relationships has proved difficult due to the great linguistic diversity present in North America. Two large (super-) family proposals, Penutian and Hokan, look particularly promising. However, even after decades of research, a large number of families and isolates remain.

North America is notable for its linguistic diversity, especially in California. California alone has 18 genetic units consisting of 74 languages (compared to the mere 4 genetic units in all of Europe: Basque, Indo-European, Uralic, Afroasiatic).[4] Another area of considerable diversity appears to have been the Southeast; however, many of these languages became extinct from European contact and as a result they are, for the most part, absent from the historical record. This diversity has been and continues to be very influential in the development of linguistic thought in the U.S.

Due to the diversity of this area, it is difficult to make generalizations that adequately characterize the entire region. Most North American languages have a relatively small number of vowels (i.e. four or five vowels). Languages of the western half of North America often have relatively large consonant inventories. The languages of the Pacific Northwest are notable for their complex phonotactics (for example, some languages have words that lack vowels entirely)[citation needed]. The languages of the Plateau area have relatively rare pharyngeals and epiglottals (they are otherwise restricted to Afro-Asiatic and Caucasian languages). Ejective consonants are also common in North America, although they are rare elsewhere (except, again, for the Caucasus region, parts of Africa, and the Mayan family).

Head-marking is found in many languages of North America (as well as in Central and South America), but outside of the Americas it is rare. Many languages throughout North America are polysynthetic (Eskimo–Aleut languages are extreme examples), although this is not characteristic of all North American languages (contrary to what was believed by 19th-century linguists). Several families have unique traits, such as the inverse number marking of Tanoan, the lexical affixes of Wakashan, Salishan and Chimakuan, and the unusual verb structure of Nadene. 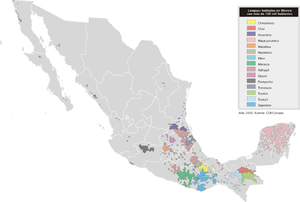 The indigenous languages of Mexico that have more than 100,000 speakers 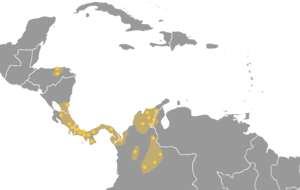 Some of the greater families of South America: dark spots are language isolates or quasi-isolate, grey spots unclassified languages or languages with doubtful classification. 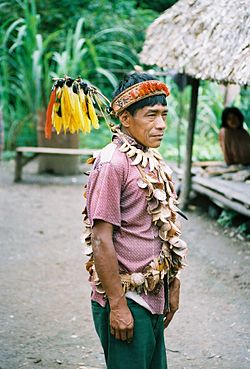 Although both North and Central America are very diverse areas, South America has a linguistic diversity rivalled by only a few other places in the world with approximately 350 languages still spoken and an estimated 1,500 languages at first European contact. The situation of language documentation and classification into genetic families is not as advanced as in North America (which is relatively well-studied in many areas). Kaufman (1994: 46) gives the following appraisal:

Since the mid 1950s, the amount of published material on SA [South America] has been gradually growing, but even so, the number of researchers is far smaller than the growing number of linguistic communities whose speech should be documented. Given the current employment opportunities, it is not likely that the number of specialists in SA Indian languages will increase fast enough to document most of the surviving SA languages before they go out of use, as most of them unavoidably will. More work languishes in personal files than is published, but this is a standard problem.

It is fair to say that SA and New Guinea are linguistically the poorest documented parts of the world. However, in the early 1960s fairly systematic efforts were launched in Papua New Guinea, and that area – much smaller than SA, to be sure – is in general much better documented than any part of indigenous SA of comparable size.

As a result, many relationships between languages and language families have not been determined and some of those relationships that have been proposed are on somewhat shaky ground.

See also: List of unclassified languages according to the Ethnologue#South

* There is little to say about these almost unattested languages. See Pijao.

Many hypothetical language phylum proposals concerning American languages are often cited as uncontroversially demonstrated in more popular writings. However, many of these proposals have, in fact, not been fully demonstrated if even at all. Some proposals are viewed by specialists in a favorable light, believing that genetic relationships are very likely to be established in the future (for example, the Penutian stock). Other proposals are more controversial with many linguists believing that some genetic relationships of a proposal may be demonstrated but much of it undemonstrated (for example, Hokan–Siouan, which, incidentally, Edward Sapir called his "wastepaper basket stock").[5] Still other proposals are almost unanimously rejected by specialists (for example, Amerind). Below is a (partial) list of some such proposals:

The languages of the Americas often can be grouped together into linguistic areas or Sprachbunds (also known as convergence areas). The linguistic areas identified so far deserve more research to determine their validity. Knowing about Sprachbunds helps historical linguists differentiate between shared areal traits and true genetic relationship. The pioneering work on American areal linguistics was a dissertation by Joel Sherzer, which was published as Sherzer (1976).

In American Indian Languages: the Historical Linguistics of Native America, Lyle Campbell also lists over 20 Sprachbunds or linguistic areas,[11] many of which are still hypothetical.

Note: Some linguistic areas may overlap with others.

Several languages are only known by mention in historical documents or from only a few names or words. It cannot be determined that these languages actually existed or that the few recorded words are actually of known or unknown languages. Some may simply be from a historian's errors. Others are of known people with no linguistic record (sometimes due to lost records). A short list is below.

Loukotka (1968) reports the names of hundreds of South American languages which do not have any linguistic documentation.

Various miscellaneous languages such as pidgins, mixed languages, trade languages, and sign languages are given below in alphabetical order.