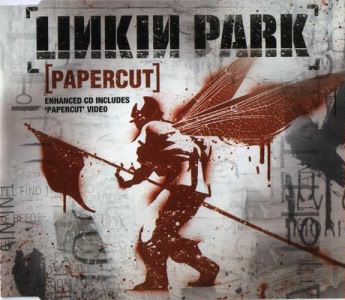 "Papercut" is a song about an individual who always looks out for himself, and is haunted by paranoia.

Even though there are no acoustic instruments in the song, lead guitarist is shown playing an in the video, and Phoenix is shown playing an (though it is possible the instruments were electric-acoustic). And although there is drumming, doesn't play drums at all in the video. has stated that "Papercut" is his favorite song from "Hybrid Theory". In live performances, the line "something in here's not right today" is changed to "something inside's not right today". Also, Chester screams parts of the first verse during live performances.

On Linkin Park's album "" (), there is a remix of this song, titled "Ppr:Kut", which was remixed by Cheapshot. Elements from the song were used in the song "Sold My Soul to Yo Mama", which appears on the band's 4th annual fan club CD. Furthermore, the mashup EP "Collision Course" () contains a mix of this song and 's "".

The music video shows the band in a seemingly haunted house. They are playing the song in a room with little light with a rather spooky picture sampled from the cover artwork of the "Xero" demo tape. This was painted by the night before the video was shot. To their left of their room is a dark kitchen that sports a bound and writhing figure; to the right of their room is what appears to be a laboratory with a strange creature inside. It moves extremely fast and in an erratic manner. Later in the song, the creature releases insects, probably dragonflies, while the baby picture and regions of the left wall bulge. 's eyes appear melted as well (using ). Also, there is a statue of a bird which spins its head all the way around, and at one point, Mike's fingers stretch. There are parts of the song during which Mike is out of sync with the music, and at one point not even moving his mouth while he is speaking. In the video, the only member of the band to take notice of the strange goings-on is the drummer, Rob Bourdon. The lyrics of the song appear scribbled along the walls in the dark rooms. Even though the song features heavy distorted electric guitars, both the guitarist () and the bassist () play acoustic guitars in the video. The effects and imagery of the music video, brings to the audience a sense of irritation and certain paranoia, which is what the song is about.

The music video was co-directed by and LP's turntablist (who also directed the videos for "" and ""). It was not released for the US.

During the commentary on the DVD "", one of the directors states that some inspiration for the video was taken from the film "Jacob's Ladder", especially with the twitching blue man in one of the rooms of the house.