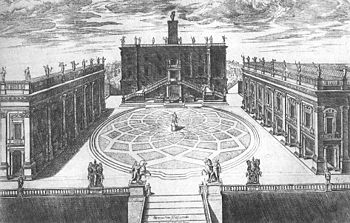 The Capitoline Museums (Italian Musei Capitolini) are a group of art and archeological museums in Piazza del Campidoglio, on top of the Capitoline Hill in Rome, Italy. The museums are contained in three palazzi surrounding a central trapezoidal piazza in a plan conceived by Michelangelo Buonarroti in 1536 and executed over a period of more than 400 years. The history of the museums can be traced to 1471, when Pope Sixtus IV donated a collection of important ancient bronzes to the people of Rome and located them on Capitoline Hill. Since then, the museums' collection has grown to include a large number of ancient Roman statues, inscriptions, and other artifacts; a collection of medieval and Renaissance art; and collections of jewels, coins, and other items. The museums are owned and operated by the municipality of Rome.

The statue of a mounted rider in the centre of the piazza is of Emperor Marcus Aurelius. It is a copy, the original being housed on-site in the Capitoline museum. Many Roman statues were destroyed on the orders of Christian Church authorities in the Middle Ages; this statue was preserved in the erroneous belief that it depicted the Emperor Constantine, who made Christianity the official state religion of the Roman empire. 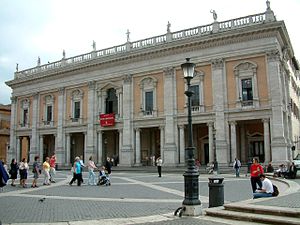 The Palazzo dei Conservatori is one of the three main buildings of the Capitoline Museums. 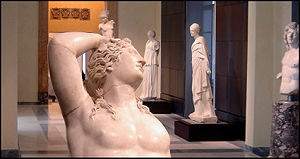 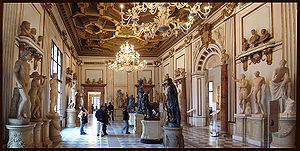 This section contains collections sorted by building, and brief information on the buildings themselves. For the history of their design and construction, see Capitoline Hill#Michelangelo.

The Capitoline Museums are composed of three main buildings surrounding the Piazza del Campidoglio and interlinked by an underground gallery beneath the piazza.

The three main buildings of the Capitoline Museums are:

In addition, the 16th century Palazzo Caffarelli-Clementino, located off the piazza adjacent to the Palazzo dei Conservatori, was added to the museum complex in the early 20th century.

The collections here are ancient sculpture, mostly Roman but also Greek and Egyptian.

The second floor of the building is occupied by the Conservator's Apartment, a space now open to the public and housing such famous works as the bronze she-wolf nursing Romulus and Remus, which has become the emblem of Rome. The Conservator's Apartment is distinguished by elaborate interior decorations, including frescoes, stuccos, tapestries, and carved ceilings and doors.

The third floor of the Palazzo dei Conservatori houses the Capitoline Art Gallery, housing the museums' painting and applied art galleries. The Capitoline Coin Cabinet, containing collections of coins, medals, jewels, and jewelry, is located in the attached Palazzo Caffarelli-Clementino.

In the Hall of the Galatian can also be appreciated the marble statue of the "Dying Gaul" also called “Capitoline Gaul” and the statue of Cupid and Psyche. Also housed in this building are:

The Galleria Congiunzione is located beneath the Palazzo dei Conservatori and the piazza itself, and links the three palazzos sitting on the piazza. The gallery was constructed in the 1930s. It contains in situ 2nd century ruins of ancient Roman dwellings, and also houses the Galleria Lapidaria, which displays the Museums' collection of epigraphs.

The new great glass covered hall — the Sala Marco Aurelio — created by covering the Giardino Romano is similar to the one used for the Sala Ottagonale and British Museum Great Court. The design is by the architect Carlo Aymonino. Its volume recalls that of the oval space designed by Michelangelo for the piazza.

Its centrepiece is the bronze equestrian statue of Marcus Aurelius, which was once in the centre of Piazza del Campidoglio and has been kept indoors ever since its modern restoration. Moving these statues out of the palazzo allows those sculptures temporarily moved to the Centrale Montemartini to be brought back. It also houses the remaining fragments of the bronze Colossus of Constantine and the archaeological remains of the tuff foundations of the temple of Capitoline Jupiter, with a model, drawn and computer reconstructions and finds dating from the earliest occupation on the site (in the mid Bronze Age: 17th-14th centuries B.C.) to the foundation of the temple (6th century BC).

In the three halls adjacent to the Appartamento dei Conservatori are to be found the showcases of the famous Castellani Collection with a part of the magnificent set of Greek and Etruscan vases that was donated to the Municipality of Rome by Augusto Castellani in the mid 19th century.

The Centrale Montemartini is a former power station of Acea (active as a power-station between the 1890s and 1930s) in southern Rome, between Piramide and the basilica of San Paolo Fuori le Mura, close to the Metro station Garbatella. Its permanent collection comprises 400 ancient statues, moved here during the reorganisation of the Capitoline Museums in 1997, along with tombs, busts, and mosaics. Many of them were excavated in the ancient Roman horti (e.g. the Gardens of Sallust) between the 1890s and 1930s, a fruitful period for Roman archaeology. They are displayed there along the lines of Tate Modern, except that (unlike there) the machinery has not been moved out.

Note: Several significant artifacts are on display in the traveling exhibition "The Dream of Rome" in The National Gallery of Art in Washington, D.C. from June 8 to September 5, 2011, as well as in other cities before 2013. [1] [2]