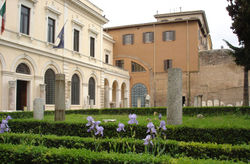 The exterior of the Museum's Baths of Diocletian site. 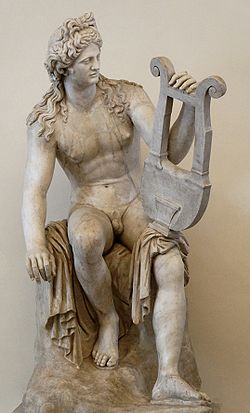 The National Museum of Rome (Museo Nazionale Romano in Italian) is a set of museums in Rome, Italy, split among various branches across the city. It was founded in 1889 and inaugurated in 1890, with the aim of collecting antiquities from between the 5th century BC to the 3rd century AD.

Its first collection was formed from the archeological collections of the Museo Kircheriano, a collection assembled by the antiquarian Athanasius Kircher, soon supplemented by the numerous new discoveries in Rome that took place during the expansive city planning effort after it became the capital of the new Kingdom of Italy. This was initially meant to be displayed in a 'Museo Tiberino' (never realised), but in 1901 the State granted the institution the Villa Ludovisi and the important national collection of ancient sculptures.

Its base was established in the 16th century cloister built by Michelangelo off the baths of Diocletian, still its main base. These buildings' adaptation to their new purpose began for the 1911 Exposition; this effort was completed in the 1930s.

In 1981, digging on a derelict city-centre site in the Campus Martius between the churches of Santa Caterina dei Funari and San Stanislao dei Polacchi, Daniel Manacorda and his team discovered the colonnaded quadriporticus of the Theatre of Lucius Cornelius Balbus, the nearby statio annonae and evidence of later, medieval occupation of the site. These are presented in this branch, inaugurated in 2001, which houses the archaeological remains and finds from that dig (including a stucco arch from the porticus). The Crypta Balbi is located at Via Delle Botteghe Oscure 31 at the corner of Via M. Caetani.

As well as new material from the excavations, objects in this museum come from

The building's basement contains archaeological remains; to see them, the visitor must be guided by a member of museum staff.

The first section ("Archaeology and history of an urban landscape") presents the results of the excavations, and puts them in the context of the history of the area. As well as the remains from the site itself, this section also tells of the Monastero di Santa Maria Domine Rose (begun nearby in the 8th century), of medieval merchants' and craftsmen's homes, of the Conservatorio di Santa Caterina dei Funari (built in the mid-16th century by Ignatius of Loyola to house the daughters of Roman prostitutes) and of the Botteghe Obscura.

A second section ("Rome from Antiquity to the Middle Ages") is the Museum of Medieval Rome and illustrates the life and transformation of Rome as a whole between the 5th and 10th centuries AD.

History of the Area

The Palazzo Altemps is located in the modern rione Ponte, part of the Campus Martius, a part of Ancient Rome that was developed beginning under the emperor Augustus. It is located directly north of the Piazza Navona. In the ancient period, this site was only 160 meters from the Ponte Elio, and was one of the two main marble ports on the Tiber River in Rome. The other was located in what is now Testaccio. In 1891, during the construction works to build the embankments that now hold back the Tiber River, the remains of this dock were uncovered. The marble was worked--into statuary, sculptural decoration, or architectural decoration--in shops, the ruins of which have been found in the zone between the church of Sant'Andrea della Valle, the Chiesa Nuova, and the Tiber River. A few of these ancient shops bear signs of hasty abandonment after the time of the emperor Trajan; tools and even unfinished statues were discovered in some cases.[1]

There was also likely a temple to Apollo located in this area, over which has been built the church of Sant'Apollinare.

In the Middle Ages and onwards, the Campus Martius was divided by the noble families of Rome. The east was controlled by the Ghibellines, led by the Colonna family, and the west by the Guelfs, led by the Orsini family. The division was mostly abandoned after the Great Schism in the 15th century, and the Campus Martius underwent a period of urbanization, leading to the Palazzo Altemps now visible. 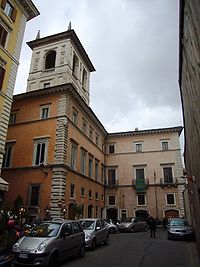 Exterior view of the Palazzo Altemps. 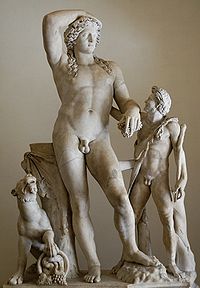 Dionysus with a panther and satyr, from the Palazzo Altemps. 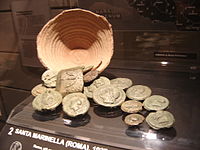 Coins on display in the basement of the Palazzo Massimo, Rome Italy. 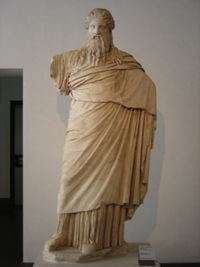 A Dionysus Sardanapalus from the Palazzo Massimo.

The building was designed in the 15th century by Melozzo da Forlì for Girolamo Riario, who was related to Pope Sixtus IV. There is still a fresco on one wall of the Room of the Sideboard in the Palazzo that celebrates the wedding of Girolamo to Caterina Sforza in 1477, showing the silver plates and other wedding gifts given to the couple. When the Riario family began to decline after the death of Sixtus IV, the Palazzo was sold to Cardinal Francesco Soderini of Volterra, who commissioned further refinements from the architects Antonio da Sangallo the Elder and Baldassarre Peruzzi. When his own family fell on hard times, he in turn sold it in 1568 to the Austrian-born cardinal Marco Sittico Altemps, the son of the sister of Pope Pius IV. Cardinal Altemps commissioned the architect Martino Longhi to expand and improve the palazzo; it was Longhi who built the 'belvedere'. He had an impressive collection of books and ancient sculpture that he wished to display. Though his position as the second son in his family meant that Marco Sittico Altemps was destined for the priesthood, he was not inclined to be a cleric, and his mistress bore him a son, Roberto, made duca di Gallese. Unfortunately, Roberto did not enjoy the Palazzo long; he was executed for adultery in 1586 by Pope Sixtus V.[2]

The Palazzo Altemps became the property of the Holy See in the 19th century, and the building was used as a seminary for a short time. It was granted to the Italian State in 1982 and after 15 years of restoration, inaugurated as a museum in 1997.

It houses the museum's displays on the history of collecting (sculptures from Renaissance collections such as the Boncompagni-Ludovisi and Mattei collections, including the Ludovisi Ares and the Suicide of a Gaul (from the same Pergamon group as the Dying Gaul) and the 'Egyptian Collection (sculptures of eastern deities). The palace also includes the historic private theatre, at present used to house temporary exhibitions, and the church of Sant' Aniceto. 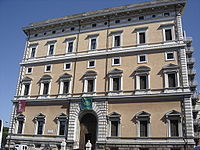 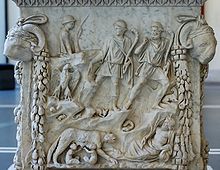 Altar of Romulus and Remus at Palazzo Massimo

On the site of Pope Sixtus V's Villa Montalto-Peretti (demolished in 1883 after the construction of the nearby train station), the present building was constructed in the neo-cinquecentesco style between 1883 and 1887 by the architect Camillo Pistrucci to house a Jesuit seminary. Used partially as a military hospital during the second world war, it then returned to scholastic functions until 1960. In 1981, by which time it was crumbling, the State acquired it for 19 billion lire and granted it to the museum. Its restoration and adaptation began in 1983. It was inaugurated as part of the museum in 1995 and completed in 1998.

It accommodates the sculpture (republican, empire and late empire) and coin/jewelry collections.

The Museum's numismatic collections, showing the evolution of currency in Italy. Most of the coins on display in the collections are very rare. It is worth mentioning Theodoric’s medallion, the four ducats of Pope Paul II with the navicella of St Peter, and the silver piastre of the Pontifical State with views of the city of Rome.

A Seleucid prince as hero, from the Palazzo Massimo.

One room is also devoted to the mummy that was found in 1964 on the Via Cassia, inside a richly decorated sarcophagus with several artefacts in amber and pieces of jewellery also on display.

Sculptures of the period between the late Roman Republic and the early imperial period (2nd century BC to 1st century AD), including the famous Tivoli General and Via Labicana Augustus (the latter from Livia's villa on the Via Labicana). Themes explored are Hellenistic influences on Roman art, and the development of the portraiture of the emperors.

Frescoes, stucci and mosaics, including those from the villa of Livia, wife of Augustus, at Prima Porta on the Via Flaminia. It begins with the summer triclinium of Livia's Villa “ad Gallinas Albas”. The frescoes, discovered in 1863 and dating back to the 1st century BC, show a luscious garden with ornamental plants and pomegranate trees. Each plant and bird species is very lifelike.

Within it, a 16th-century garden and outdoor displays of altars and funerary sculpture and inscriptions.

Main hall of the baths

Still preserved, and used mainly for temporary exhibitions whilst a permanent exhibition of finds from some important urban excavations is in preparation.

On the first floor

Restored in 1991. Devoted to sculptures found on baths sites in Rome, including the bronze Athlete and Boxer (now on display at the Palazzo Massimo alle Terme site) from the Baths of Constantine.