He initially debuted as The Jester on the Floridian independent circuit, before quickly changing his name to Roderick Strong. He worked for IPW Hardcore and NWA Florida, before debuting for ROH in September 2003. In mid-2004, Strong joined forces with Alex Shelley, Austin Aries, and Jack Evans, collectively known as Generation Next. As part of Generation Next, Strong won the ROH World Tag Team Championship with Aries. Strong later turned on Aries, forming a new faction, the No Remorse Corps with Davey Richards and Rocky Romero. During this time, he was also competing for ROH's sister promotion, FIP, and debuted for PWG. Strong also toured Japan with Dragon Gate and had a brief stint in Total Nonstop Action Wrestling in 2005.

Lindsey was born in Wisconsin, but relocated to Florida at a young age. Following a troubled childhood, Lindsey graduated from Riverview High School[disambiguation needed

], where he played American football, He went on to attend the University of South Florida on an academic scholarship. Lindsey majored in Business for two years before postponing his academic career.[2][4]

In the autumn of 1994, Lindsey's father, a former collegiate wrestler, began training as a wrestler under Jim Neidhart. After Lindsey attended several training sessions and met Harry Smith, a third generation wrestler, he decided to become a wrestler. Lindsey was trained by Neidhart and a number of other wrestlers in Tampa, Florida and debuted in 2000 as The Jester on the Floridian independent circuit for the RWA.[3][4]

Strong wrestled his first match for the Independent Professional Wrestling promotion, competing in a twenty man cruiserweight Battle royal. He was initially one-third of a stable known as "Risk Factor" with The Kamikaze Kid & Kid Lethal before he formed a tag team with his trainee and kayfabe brother, Sedrick Strong. The Strong Brothers defeated Wrongful Death (Naphtali and Dagon Briggs) for the IPW Tag Team Championship on June 28, 2002 in St. Petersburg, Florida. They held the title until September 20, when they lost to Naturally Marvelous (Scoot Andrews and Mike Sullivan) in a steel cage match in which Roderick suffered a concussion.[3][4][5]

After Sedrick cost the Strong Brothers a number of matches, Roderick turned heel on February 8, 2003, betraying Sedrick and aligning himself with the Alliance of Defiance, a dominant heel stable.[6]

After IPW closed down in late 2003, Strong began working for NWA Florida, a promotion which had had a working relationship with IPW for two years. Strong defeated David Babylon for the Florida Unified Cruiserweight Championship on July 19, 2003 in St. Petersburg. While Strong was champion, the title was renamed the Florida Unified Junior Heavyweight Championship. He lost the title to Jerrelle Clark in a four way match on December 13, 2003 in St. Petersburg. Clark vacated the title on January 10, 2004 after winning the NWA World Junior Heavyweight Championship, and Strong defeated Mikey Batts for the vacant title on February 21 in the New Alhambra Sports and Entertainment Center in Philadelphia, Pennsylvania. He lost the title to Sedrick Strong on April 29, 2004, in New Port Richey, Florida.[4][7][8]

In addition to wrestling for NWA Florida, Strong served as the head trainer of the NWA Florida wrestling school.[6]

Strong joined the Pennsylvania-based Ring of Honor (ROH) promotion in September 2003. On May 22, 2004, at Generation Next he formed a stable known as Generation Next with Alex Shelley, Austin Aries and Jack Evans. Generation Next quickly dominated the ROH roster, declaring themselves the future of wrestling. After defeating several other stables, they defeated CM Punk, Ace Steel, John Walters and Jimmy Jacobs (mentored by Ricky Steamboat) on October 2 at The Midnight Express Reunion.[1]

Strong began punctuating his ring style with stiff offense, acting as the enforcer of Generation Next. In November 2004 he formed a regular tag team with Evans, and on December 26 he, Evans and Aries threw Shelley out of the group when he refused to resign as leader. Strong and Evans continued to team throughout early-2005, but were unable to win the ROH Tag Team Championship. On July 9, 2005 at Escape from New York, Strong faced CM Punk for the ROH World Championship, but was defeated. On September 24 at Survival of the Fittest 2005, Strong defeated Samoa Joe, Jay Lethal, Generation Next teammate Austin Aries, and Colt Cabana to win the titular event, thus earning himself another shot at the ROH World Championship in the future.[1][4] 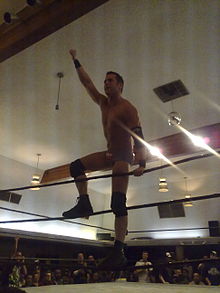 Strong during his signature ring entrance.

On October 1 at Joe vs. Kobashi, valet Jade Chung aligned herself with Strong (and the remainder of Generation Next) after he defeated her former client, Jimmy Rave. The following night, Strong defeated James Gibson in his last match for Ring of Honor before returning to World Wrestling Entertainment. Following the match, Gibson gave a farewell speech in which he called Strong the "MVP" of Ring of Honor.[1][4]

At Final Battle 2005 on December 17, 2005, Strong and Aries defeated Sal Rinauro and Tony Mamaluke to win the ROH World Tag Team Championship.[9] They held the titles until September 16, 2006, when they were defeated by The Kings of Wrestling (Chris Hero and Claudio Castagnoli).[9] In February 2007, Strong turned on Aries to form a new faction with Davey Richards called the No Remorse Corps.[1]

The No Remorse Corps went on to feud with Aries' new faction The Resilience. Rocky Romero joined the NRC, while Matt Cross and Erick Stevens joined The Resilience. Though the NRC dominated the feud for the most part, the feud's end came with Strong losing matches to Aries at both Undeniable and Reckless Abandon in a 30-minute Iron Man Match.

Strong then began to feud with Stevens over the FIP title. Strong lost the title to Stevens at Final Battle 2007, but won it back at FIP Redefined. He continued to hold onto the belt in several matches with Stevens, and won a Fight Without Honor against Stevens at ROH Respect is Earned II by superplexing Stevens off a ladder through two tables. However, he lost the FIP title to Stevens at FIP Hot Summer Nights 2008 in a Dog Collar match to end their feud.

At Respect is Earned II, Davey Richards turned on Strong to join Sweet and Sour Inc. Since then Strong has been feuding with the group, often being on the losing side of matches. On an episode of ROH on HDNet, Strong was chosen as a judge for the Tyler Black/Austin Aries match for the ROH World Title on February 13. Strong only became the judge, because Black promised him a Title match, after he wins the belt from Aries.

On May 22, 2010, Strong turned heel and debuted Truth Martini as his new manager.[10] At the following pay-per-view, Death Before Dishonor VIII, on June 19, Strong defeated Colt Cabana, Steve Corino, Shawn Daivari, Tyson Dux and Eddie Edwards in a gauntlet match, with an assist from Martini, to earn the right to challenge for the ROH World Championship.[11] On September 11, 2010, at Glory By Honor IX, Strong defeated Tyler Black in a No Disqualification match to win the ROH World Championship for the first time.[12] He then took a brief leave of absence from ROH to travel to Pro Wrestling Noah with ROH World Television Champion Eddie Edwards to participate in the Nippon Television Junior Heavyweight Tag League.[13] Strong successfully defended the ROH World Championship on December 18 at Final Battle 2010 against former stable mate Davey Richards and on February 26, 2011, at 9th Anniversary Show against Homicide in a No Holds Barred match.[14][15] On March 2, 2011, ROH announced that Strong had signed a new contract with the promotion.[16] Just over two weeks later, on March 19, Strong lost the ROH World Championship to Eddie Edwards at Manhattan Mayhem IV.[17][18]

On April 1 at Honor Takes Center Stage, Strong faced Richards once again in a rematch from their encounter at Final Battle. This time, Richards defeated Strong after making him submit to an Ankle Lock. The following night, on the second night of the iPPV, Strong lost again, this time to El Generico. After the match, Strong's teammate from the House of Truth, Michael Elgin, attacked Generico until Colt Cabana made the save. Christopher Daniels also came out, presumably to assist fellow babyfaces Cabana and Generico, but turned heel after hitting Generico with the Book of Truth and hitting Cabana with the Angel's Wings, thus joining the House of Truth. On August 13 at the first ever TV tapings of Ring Of Honor Wrestling under Sinclair Broadcasting Group Strong received another shot at the ROH world title against Davey Richards but was unsuccessful.

In his first major appearance with Total Nonstop Action Wrestling, Strong lost a special "Showcase Match" to Austin Aries at the TNA Unbreakable pay-per-view on September 11, 2005. On September 22, it was announced that he had signed a contract with TNA, and would wrestle A.J. Styles on the first episode of TNA Impact! on Spike TV on October 1. Strong went on to lose the subsequent bout.[1][4]

In December 2005, Strong toured Japan with the Dragon Gate promotion. In 2006, he formed a stable in TNA with Austin Aries and Alex Shelley. In February 2006, he and Aries were both suspended for two months for arriving four hours late for the pay-per-view TNA Against All Odds 2006.[19] He returned to TNA in April 2006, but was released shortly thereafter.

Strong had his first match in Pro Wrestling Guerrilla (PWG) on February 12, 2005, wrestling a total of two matches in that year. After he and Jack Evans defeated El Generico and Human Tornado, the two challenged Davey Richards and Super Dragon for the PWG World Tag Team Championship, but were defeated.

Strong would win his second PWG tag title as a result of the Dynamite Duumvirate Tag Team Title Tournament held in May 2007 to determine new PWG World Tag Team Champions. This time, however, Strong would win the titles with UK wrestler PAC. Strong would enter PWG's Battle of Los Angeles and defeat Austin Aries, Joey Ryan and Alex Shelley on his way to the finals before being defeated by CIMA.

On May 17 and 18 Strong entered PWG's second annual DDT4 tag team tournament this time with partner Jack Evans. They would go on to defeat the teams of Scorpio Sky and Ronin and Los Luchas on their way to the finals where they defeated the PWG Tag Team Champions Kevin Steen and El Generico to become champions. This was Strong's second victory in a DDT4 tournament.

On July 6, 2008 at Life During Wartime in Reseda, California, Jimmy Jacobs and Tyler Black defeated the team of El Generico (substituting for Jack Evans) and Strong to win the PWG World Tag Team Championship. 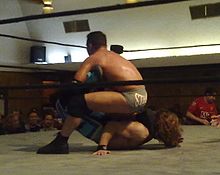 Strong performing a Boston crab in 2009 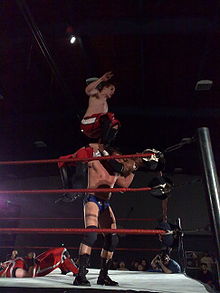 Strong and Jack Evans performing Ode to the Bulldogs on Scorpio Sky and Ronin.