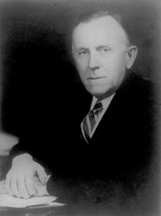 William John Bulow (, ndash , ) was an American politician and a . He was the first Democratic Governor of , receiving the highest vote ever received by a Democratic candidate for governor up to that time, ["South Dakota Manual, 1927", p.235] , and then went on to serve as a member of the .

Bulow was born of German ancestry to Joseph and Elizabeth (Ebendorf) Bulow near Moscow in , where he was raised and educated. In 1893, he graduated with a law degree from the .

During 1893, Bulow moved to . He resided in Sioux Falls, where he worked for the Joe Kirby office. Then, he came by horse and carriage to Beresford, where he set up his own law office and helped to develop the town. He was elected to the state senate of the in 1898. ["South Dakota Manual, 1927", p.235] While residing in Beresford, Bulow spent twenty-five years as city attorney from 1902 to 1927, except while serving as mayor from 1912 to 1913. He also served as County Judge for Beresford in 1918. Bulow ran unsuccessfully for goveror in 1924, but won in 1926 ["South Dakota Manual, 1927", p.235] , and served as Governor of South Dakota from 1927 to 1931 and as a member of the US Senate from 1931 to 1943. During his entire life, Bulow kept a legal residence in Beresford, South Dakota and voted by absentee ballot. He was defeated for renomination for a third term in the South Dakota Democratic Primary Election by former governor, , and Bulow retired and spent the rest of his life residing at 3901 Connecticut Avenue NW in . Bulow spent his last few years in failing health and was blind during his last four years. He was a member of the . [ [http://www.nndb.com/org/692/000051539/ Alfalfa Club ] ]

honored William J. Bulow during the town's seventy-five year jubilee observance in 1959. The city's park was dedicated as "Bulow Park" on . Almost nine months later, Bulow died; and, his body was returned to Beresford for burial at the St. John Catholic Cemetery, where he was interred next to his first wife, Katherine (Reedy) Bulow (, ndash , ). Years later, Bulow's house in Beresford, South Dakota was declared a historic landmark.