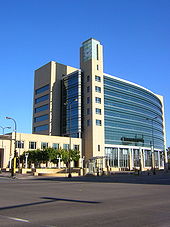 Part of the Fed complex seen from under the Hennepin Bridge, from Nicollet Island, across the Mississippi River

Part of the Fed complex seen from the Hennepin Avenue Bridge

The Federal Reserve Bank of Minneapolis, located in Minneapolis, Minnesota, in the United States, covers the 9th District of the Federal Reserve, including Minnesota, Montana, North and South Dakota, northwestern Wisconsin, and the Upper Peninsula of Michigan. Although its geographical territory is the third largest in the Federal Reserve system, it serves a population base of only 8,349,261 (2000 census), the smallest in the system. It has one branch in Helena, Montana. Narayana Kocherlakota became president and chief executive officer on Oct. 8, 2009 (Gary H. Stern was the previous president). The Minneapolis Fed has strong ties to the economics department at the University of Minnesota. Nobel laureate economist Edward Prescott was affiliated with both institutions for a long time. The Bank publishes The Region, a magazine featuring articles about economic policy and interviews with famous economists.

Current Board of Directors

The following people are on the board of directors as of 2011:[1]

Class B (elected by member banks to represent the public)

Three buildings have served as headquarters for the district, all within a few blocks of each other. 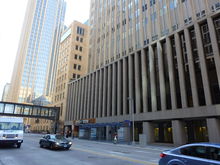 Today renovated past recognition, 510 Marquette was the first headquarters of the bank

The first was designed by Cass Gilbert and completed in 1915. It was unusual in that there were no windows on the lower walls close to the street—from the start, large bricks filled in the spaces where windows would be expected. Only up at the top was anyone able to look out from the building. The structure only became more strange in the 1950s, when a small skyscraper 8 stories tall was added on top. The modern superstructure clashed with the granite Roman columns on the building's façade. After the Fed moved to its second building in 1973, the new owner, a partnership of New York developers, Peter V. Tishman and Jay Marc Schwamm, had the lower portion covered with something that was a better match to the skyscraper "hat" on top. The 3-foot-thick (0.91 m), windowless, lower floors were stripped of the granite and replaced with a "bird cage" limestone facade (designed by Minneapolis architect Robert Cerny) and a totally artificially sustained natural 3,000-square-foot (280 m2) garden of ficus trees and pools of water (designed by landscape architectural firm of Lawrence Halprin of San Francisco). At the time it was the largest totally artificially sustained garden within an office building in the United States- modeled after the Ford Foundation Building in New York City, which has a larger garden, but also one that relies to some extent on outside natural light. There was also the need to remove the interior, independently supported five story vault so that the building could be connected to the adjacent F&M Bank Building, and also become part of the second floor, Minneapolis "skyway" system. After a three year development the owners persuaded the National City Bank of Minneapolis (now part of M&I Bank)to move to the building and become the principal tenant, the building became known as "The National City Bank Building" until the bank moved out some years later. On completion of the renovation, the building received the Minneapolis CUE (Committee on the Urban Environment) award for having done the most for the urban environment of Minneapolis. The building still exists as 510 Marquette at the corner of Marquette Avenue and 5th Street South in Minneapolis, right next to the Nicollet Mall station of the Hiawatha light rail line. 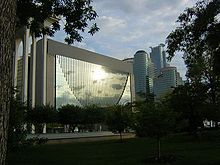 The Federal Reserve moved two blocks away on Marquette Avenue to a building now known as Marquette Plaza, which is constructed much like a suspension bridge with cables strung between pillars at the ends carrying the load. It is noted as the first (and perhaps only) building ever made to use catenary support. Design problems, along with asbestos contamination, led the Federal Reserve to decide to move into a new complex and sell the old structure. The new owner rehabilitated the building and added on, and the building temporarily housed the central Minneapolis Public Library while its new building was under construction. The building was designed to accommodate another cable to complete the circle which was never built. 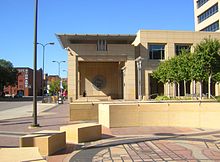 Part of the entrance on First Street and Hennepin Avenue

Designed by architecture firm HOK, a complex along the Mississippi River now serves as home to the Minneapolis Fed, which moved there in 1997. The address was set as 90 Hennepin Avenue to match the 9th district designation. It is located on the site of the former Minneapolis Great Northern Depot adjacent to the Hennepin Avenue Bridge and the Pacific sawmill once owned by T. B. Walker and George A. Camp.[2][3]