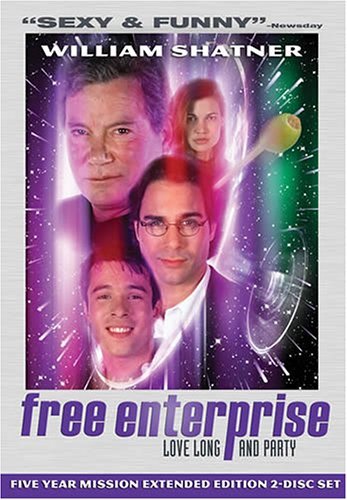 "Free Enterprise" is a comedy/romance movie featuring , directed by Robert Meyer Burnett and written by Mark A. Altman and Robert Meyer Burnett. The film deals with the mid-life crises of its two main protagonists, Mark and Robert, fictionalized versions of the film's director and producer/writer played by and Rafer Weigel. The two friends struggle with adult career and relationship problems, all the while defiantly clinging to the geeky science fiction of their youth and seeking advice from their greatest hero, William Shatner.

Shatner plays a campy caricature of himself as he works on a one-man musical version of "Julius Caesar" in hopes of finally being taken seriously as an artist. Hip-hop artist "The Rated R", joined by Shatner, provides the concluding musical number, "Julius Caesar", a pastiche of famous lines from the play set to a rap rhythm. The film's score was produced by .

The film is laced with references to past and contemporary science-fiction films and television shows, such as and Logan's Run. Most prominent is the original "", which is treated by the protagonists as a source of inspiration and moral guidance. "Free Enterprise" explores the dating scene for late gen-x Hollywood singles from a decidedly sardonic perspective.

*
* [http://www.bitsofnews.com/content/view/3413/42/ In depth review of the Extended Edition] -- by Philipe Rubio, Bits of News.
* [http://www.ez-entertainment.net/interview/altmanview.htm interview with Mark Altman]
* [http://www.chaseclub.com/freee.html a collection of articles about the movie]