For other uses, see Lunar eclipse (disambiguation).
Not to be confused with Solar eclipse. 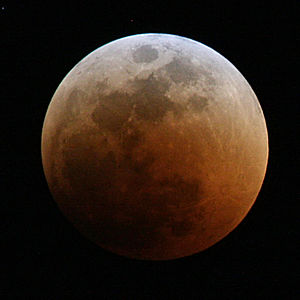 A lunar eclipse occurs when the Moon passes behind the Earth so that the Earth blocks the Sun's rays from striking the Moon. This can occur only when the Sun, Earth, and Moon are aligned exactly, or very closely so, with the Earth in the middle. Hence, a lunar eclipse can only occur the night of a full moon. The type and length of an eclipse depend upon the Moon's location relative to its orbital nodes. The most recent total lunar eclipse occurred on June 15, 2011; it was a central eclipse, visible over Europe and South America after sunset, over Africa and most of Asia, and Australia before sunrise. It lasted 100 minutes. The previous total lunar eclipse occurred on December 21, 2010, at 08:17 UTC.[1] 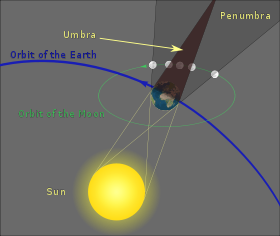 Schematic diagram of the shadow cast by the Earth. Within the central umbra shadow, the Moon is totally shielded from direct illumination by the Sun. In contrast, within the penumbra shadow, only a portion of sunlight is blocked. 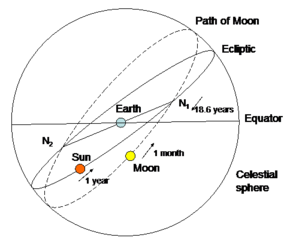 As seen by an observer on Earth on the imaginary celestial sphere, the Moon crosses the ecliptic every orbit at positions called nodes twice every month. When the full moon occurs in the same position at the node, a lunar eclipse can occur. These two nodes allow two to five eclipses per year, parted by approximately six months. (Note: Not drawn to scale. The Sun is much larger and farther away than the Moon.)

A partial lunar eclipse occurs when only a portion of the Moon enters the umbra. When the Moon travels completely into the Earth’s umbra, one observes a total lunar eclipse. The Moon’s speed through the shadow is about one kilometer per second (2,300 mph), and totality may last up to nearly 107 minutes. Nevertheless, the total time between the Moon’s first and last contact with the shadow is much longer, and could last up to 4 hours.[2] The relative distance of the Moon from the Earth at the time of an eclipse can affect the eclipse’s duration. In particular, when the Moon is near its apogee, the farthest point from the Earth in its orbit, its orbital speed is the slowest. The diameter of the umbra does not decrease appreciably within the changes in the orbital distance of the moon. Thus, a totally eclipsed Moon occurring near apogee will lengthen the duration of totality.

The timing of total lunar eclipses are determined by its contacts:[3]

A selenelion or selenehelion occurs when both the Sun and the eclipsed Moon can be observed at the same time. This can only happen just before sunset or just after sunrise, and both bodies will appear just above the horizon at nearly opposite points in the sky. This arrangement has led to the phenomenon being referred to as a horizontal eclipse. It happens during every lunar eclipse at all those places on the Earth where it is sunrise or sunset at the time. Indeed, the reddened light that reaches the Moon comes from all the simultaneous sunrises and sunsets on the Earth. Although the Moon is in the Earth’s geometrical shadow, the Sun and the eclipsed Moon can appear in the sky at the same time because the refraction of light through the Earth’s atmosphere causes objects near the horizon to appear higher in the sky than their true geometric position.[4]

The Moon does not completely disappear as it passes through the umbra because of the refraction of sunlight by the Earth’s atmosphere into the shadow cone; if the Earth had no atmosphere, the Moon would be completely dark during an eclipse. The red coloring arises because sunlight reaching the Moon must pass through a long and dense layer of the Earth’s atmosphere, where it is scattered. Shorter wavelengths are more likely to be scattered by the air molecules and the small particles, and so by the time the light has passed through the atmosphere, the longer wavelengths dominate. This resulting light we perceive as red. This is the same effect that causes sunsets and sunrises to turn the sky a reddish color; an alternative way of considering the problem is to realize that, as viewed from the Moon, the Sun would appear to be setting (or rising) behind the Earth.

The amount of refracted light depends on the amount of dust or clouds in the atmosphere; this also controls how much light is scattered. In general, the dustier the atmosphere, the more that other wavelengths of light will be removed (compared to red light), leaving the resulting light a deeper red color. This causes the resulting coppery-red hue of the Moon to vary from one eclipse to the next. Volcanoes are notable for expelling large quantities of dust into the atmosphere, and a large eruption shortly before an eclipse can have a large effect on the resulting color.

The following scale (the Danjon scale) was devised by André Danjon for rating the overall darkness of lunar eclipses:[5]

Every year there are at least two lunar eclipses, although total lunar eclipses are significantly less common. If one knows the date and time of an eclipse, it is possible to predict the occurrence of other eclipses using an eclipse cycle like the saros.