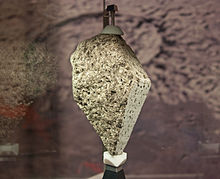 Moon rock describes rock that formed on the Earth's moon. The term is also loosely applied to other lunar materials collected during the course of human exploration of the Moon.

There are currently three sources of Moon rocks on Earth: 1) those collected by US Apollo missions; 2) samples returned by the Soviet Union Luna missions; and 3) rocks that were ejected naturally from the lunar surface by cratering events and subsequently fell to Earth as lunar meteorites. During the six Apollo surface excursions, 2,415 samples weighing 382 kg (842 lb) were collected, the majority by Apollo 15, 16, and 17. The three Luna spacecraft returned with an additional 0.32 kg (0.7 lb) of samples. Since 1980, over 120 lunar meteorites representing about 60 different meteorite fall events (none witnessed) have been collected on Earth, with a total mass of over 48 kg. About one third of these were discovered by US and Japanese teams searching for Antarctic meteorites (e.g., ANSMET), with most of the remainder having been discovered by collectors in the desert regions of northern Africa and Oman.

Almost all lunar rocks are depleted in volatiles (such as potassium or sodium) and are completely lacking in the minerals found in Earth's water. In some regards, lunar rocks are closely related to Earth's rocks in their composition of the element oxygen. The Apollo moon rocks were collected using a variety of tools, including hammers, rakes, scoops, tongs, and core tubes. Most were photographed prior to collection to record the condition in which they were found. They were placed inside sample bags and then a Special Environmental Sample Container for return to the Earth to protect them from contamination. In contrast to the Earth, large portions of the lunar crust appear to be composed of rocks with high concentrations of the mineral anorthite. The mare basalts have relatively high iron values. Furthermore, some of the mare basalts have very high levels of titanium (in the form of ilmenite). A new mineral found on the Moon, armalcolite, was named for the three astronauts on the Apollo 11 mission: Armstrong, Aldrin, and Collins. 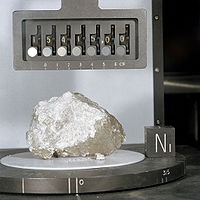 The main repository for the Apollo moon rocks is the Lunar Sample Building at the Lyndon B. Johnson Space Center in Houston, Texas. For safe keeping, there is also a smaller collection stored at Brooks Air Force Base in San Antonio, Texas. Most of the rocks are stored in nitrogen to keep them free of moisture. They are only handled indirectly, using special tools.

Moon rocks collected during the course of lunar exploration are currently considered priceless. In 1993, three small fragments from Luna 16, weighing 0.2 g, were sold for US$ 442,500. In 2002, a safe, containing minute samples of lunar and Martian material, was stolen from the Lunar Sample Building. The samples were recovered; in 2003, during the court case, NASA estimated the value of these samples at about $1 million for 285 g (10 oz) of material. Moon rocks in the form of lunar meteorites, although expensive, are widely sold and traded among private collectors.

Near the end of the third and final moonwalk and what would be the last moonwalk of the Apollo program, Apollo 17 astronauts Eugene Cernan and Harrison Schmitt picked up a rock (later labeled sample 70017[3]) and made a special dedication to the young people of Earth and "picked up a very significant rock, typical of what we have here in the valley of Taurus-Littrow... composed of many fragments, of many sizes, and many shapes, probably from all parts of the Moon, perhaps billions of years old. " Then President Richard Nixon ordered the distribution of fragments of that rock to 135 foreign heads of state, the 50 U.S. states and its provinces. The fragments were presented encased in an acrylic sphere, mounted on a wood plaque which included the recipients flag which had also flown aboard Apollo 17.[4]

At least one of these was later stolen, sold, and recovered.[5] Other samples went to selected museums, including the National Air and Space Museum, the Kansas Cosmosphere and Space Center, the Washington State Historical Society, and the Ontario Science Centre. The Tribune Tower in Chicago has a small piece in a display case facing Michigan Ave. The Space Window in Washington National Cathedral incorporates a small moon rock within its stained glass. NASA says that almost 295 kilograms (650 lb) of the original 382 kilograms (840 lb) of samples are still in pristine condition in the vault at Johnson Space Center.

NASA has also made a number of educational packs comprising a disc of six small rock and soil samples in a lucite disc and a pack of thin petrological sections. They are available for exhibition and educational purposes in many countries, including Great Britain, where the samples are kept by the Science and Technology Facilities Council. 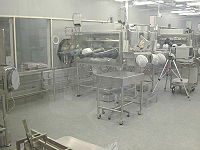 Slice of moon rock at the National Air and Space Museum in Washington, DC

The magnesian suite (or "mg suite") consists of dunites (>90% olivine), troctolites (olivine-plagioclase), and gabbros (plagioclase-pyroxene) with relatively high Mg/Fe ratios in the mafic minerals and a range of plagioclase compositions that are still generally calcic (An86-93). These rocks represent later intrusions into the highlands crust (ferroan anorthosite) at round 4.3-4.1 Ga. An interesting aspect of this suite is that analysis of the trace element content of plagioclase and pyroxene require equilibrium with a KREEP-rich magma, despite the refractory major element contents.

The alkali suite is so-called because of its high alkali content -- for moon rocks. The alkali suite consists of alkali anorthosites with relatively sodic plagioclase (An70-85), norites (plagioclasse-orthopyroxene), and gabbronorites (plagioclase-clinopyroxene-orthopyroxene) with similar plagioclase compositions and mafic minerals more iron-rich than the magnesian suite. The trace element contents of these minerals also indicates a KREEP-rich parent magma. The alkali suite spans an age range similar to the magnesian suite. Lunar granites are relatively rare rocks that include diorites, monzodiorites, and granophyres. They consist of quartz, plagioclase, orthoclase or alkali feldspar, rare mafics (pyroxene), and rare zircon. The alkali feldspar may have unusual compositions unlike any terrestrial feldspar, and they are often Ba-rich. These rocks apparently form by the extreme fractional crystallization of magnesian suite or alkali suite magmas, although liquid immiscibility may also play a role. U-Pb date of zircons from these rocks and from lunar soils have ages of 4.1-4.4 Ga, more or less the same as the magnesian suite and alkali suite rocks. In the 1960s, NASA researcher John A. O'Keefe and others linked lunar granites with tektites found on Earth although many researchers refuted these claims. According to one study, a portion of lunar sample 12013 has a chemistry that closely resembles javanite tektites found on Earth.

Lunar breccias range from glassy vitrophyre melt rocks, to glass-rich breccia, to regolith breccias. The vitrophyres are dominantly glassy rocks that represent impact melt sheets that fill large impact structures. They contain few clasts of the target lithology, which is largely melted by the impact. Glassy breccias form from impact melt that exit the crater and entrain large volumes of crushed (but not melted) ejecta. It may contain abundant clasts that reflect the range of lithologies in the target region, sitting in a matrix of mineral fragments plus glass that welds it all together. Some of the clasts in these breccias are pieces of older breccias, documenting a repeated history of impact brecciation, cooling, and impact. Regolith breccias resemble the glassy breccias but have little or no glass (melt) to weld them together. As noted above, the basin-forming impacts responsible for these breccias pre-date almost all mare basalt volcanism, so clasts of mare basalt are very rare. When found, these clasts represent the earliest phase of mare basalt volcanism preserved.

Mare basalts are named for their frequent rate of constituting a large portion of the lunar maria; they are made of mare basalts, which are like terrestrial basalts but have many important differences. The basalts show a large negative europium anomaly. Extraordinary potassium content can be found in a specific basalt, the so-called VHK (Very High K) basalt.

Because of their rarity, and the difficulty of obtaining more, moon rocks are celebrities amongst stones. They have been targets of vandalism, and many have gone missing or were stolen.