Nalanda International University (also known as University of Nalanda or Nalanda University) is the name of a proposed university in Nalanda, Bihar which is expected to be functional from 2013[1] with seven schools or more and will expand in later years.[2] The university is based on the ideal of the ancient center of higher learning which was present from the 5th century CE to 1197 CE. 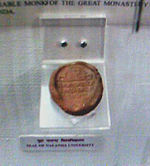 Nālandā University as it stood before it was excavated.

Historical studies suggest that the University of Nalanda was established during the reign of a king called Śakrāditya.[3] Both Xuanzang and Prajñavarman cite him as the founder, as does a seal discovered at the site.[4]

Nalanda University was the first great university in recorded history[5] and one of the world's first residential university as it had dormitories for students. It is also one of the most famous universities. In its heyday, it accommodated over 10,000 students and 2,000 teachers.[6] The university was considered an architectural masterpiece, and was marked by a lofty wall and one gate. Nalanda had eight separate compounds and ten temples, along with many other meditation halls and classrooms. On the grounds were lakes and parks. The library was located in a nine storied building where meticulous copies of texts were produced.

The Tang Dynasty Chinese pilgrim and scholar Xuanzang studied, taught and spent nearly 15 years at Nalanda University.[7] He has left detailed accounts of the university in the 7th century.[8] Yijing has also left information about the other kingdoms lying on the route between China and the Nālandā university. He was responsible for the translation of a large number of Buddhist scriptures from Sanskrit into Chinese.

According to records of history, Nalanda University was destroyed three times by invaders, but only rebuilt twice. The first time was by the Huns under Mihirakula during the reign of Skandagupta (455-467 AD). But Skanda’s successors promptly undertook the restoration, improving it with even grander buildings, and endowed it with enough resources to let the university sustain itself in the longer term.[9]

The second destruction came with an assault by the Gaudas in the early 7th century. This time, the Hindu king Harshavardhana (606-648 AD) restored the Buddhist university.[10]

The final blow came when it was violently destroyed in an Afghan attack led by Bakhtiyar Khilji in 1193.[11] In 1193, the Nalanda University was sacked by Bakhtiyar Khilji, a Turk;[12] this event is seen by scholars as a late milestone in the decline of Buddhism in India. The Persian historian Minhaj-i-Siraj, in his chronicle the Tabaquat-I-Nasiri, reported that thousands of monks were burned alive and thousands beheaded as Khilji tried his best to uproot Buddhism.[13]

On 28th March, 2006 then President A.P.J.Abdul Kalam proposed the idea while addressing the Joint Session of the Bihar Vidhan Mandal for revival of Nalanda university. The Nalanda University Bill, 2010[17] was passed on August 21, 2010 in Rajya Sabha and August 26, 2010 in Lok Sabha. The bill received Presidential assent on September 21, 2011 thereby becoming an Act. The University came into existence on November 25, 2010, when the Act was implemented.

Japan and Singapore are financing the construction work, with contributions totalling around US$100 million.[18] Gopa Sabharwal has been appointed the first Vice Chancellor of this university in February 2011.

It has been estimated that US$500m will be required to build the new facility, with a further US$500m needed to sufficiently improve the surrounding infrastructure. The group is looking for donations from governments, private individuals and religious groups.[19]

The State Government of Bihar handed over 443 acres of sprawling land acquired from local people, to the University, where construction work has begun. It is a dream project of the former Indian president APJ Abdul Kalam.[20]

For best architectural design, a global competition will be held for construction of an international state-of-the-art institution.[21][22]

The Government of India constituted a Nalanda Mentor Group (NMG) in 2007, under the Chairmanship of Professor Amartya Sen to examine the framework of international cooperation, and proposed structure of partnership, which would govern the establishment of this University as an international centre of education. The University of Nalanda is proposed to be established under the aegis of the East Asia Summit (EAS), as a regional initiative. The NMG also has representatives from Singapore, China, Japan and Thailand. The NMG has met six times. The last meeting was held in New Delhi on 2-3 August 2010.[23]

The Nalanda mentor consists of: