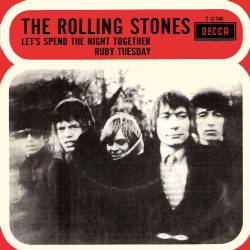 According to Keith Richards in a 1971 "" interview he wrote the song in a Los Angeles hotel room in early 1966 about a he knew;

"That's a wonderful song," told in 1995. "It's just a nice melody, really. And a lovely lyric. Neither of which I wrote, but I always enjoy singing it."

"" magazine ranked the song #303 on their list of the . The song title was the source of the restaurant chain of the same name.

A concert rendition from the Rolling Stones' was released on the band's 1991 concert album "Flashpoint". All post-2002 reissues of the studio version of "Ruby Tuesday" on CD are missing a vocal overdub in the chorus.

* American singer-songwriter covered the song for her 1970 album "". Her version was a UK Top Ten hit that same year.
* Scottish rock band Nazareth included a cover of the song on their 1984 album "The Catch".
* covered the song with his American group the in 1985.
* covered this and 11 other Rolling Stones songs in his polka medley, .
* 's rendition of the song was featured on the 1989 compilation entitled "Music from the Award Winning Show: The Wonder Years", a soundtrack for "" TV series.
* and cover it on the 1989 album "It's Spooky".
* recorded a cover of the song, which was later included on his 1993 compilation album "Lead Vocalist".
* Italian dance artist released a cover of the song in 1994.
* 's 1996 cover (which was included on the Rolling Stones tribute compilation "Stone Free") is similar to Melanie Safka's, a major influence of Torrini's.
* The Swiss band Gotthard released it on the 2002 compilation album "One Life, One Soul".
* A cover by was included on the soundtrack of the 2006 film "".
* A snippet of the song is often sung by along with "" during performances of "Bad" at concerts, most notably performed at in . Another example of this is in the U2 documentary/concert footage film "" from 1988.
* German singer often sings the song in concert. While available on her live DVD, to date it has never been officially released or re-recorded in the studio.
* Scottish singer covered the song on his 1996 album Sail On.
* Ohio-based band has covered the song in concerts. A version was included on their live "" album in 1999.
* A live performance of the song by the East German rock band Silly is available on one of their concert DVDs. A live acoustic version is on a CD they released with the German singer on the 1999 album "Silly & Gundermann & Seilschaft Unplugged".
* The song is a favorite of Irish pop band . They performed it with for their 2002 "VH1 Live in Dublin" album, and also included it on their 2006 album "".
* , British singer, covered the song for his 2007 album "".

* A snippet from this song plays a vital part in the 1997 -winning novel "".
* The song is featured in the 2001 film "" in a scene with and . The scene also features the Rolling Stones song "She Smiled Sweetly".
* The song appears in the 2006 film "".
* Ruby Tuesday is the title of an animated movie musical in the works that will be based on the music of the Rolling Stones.