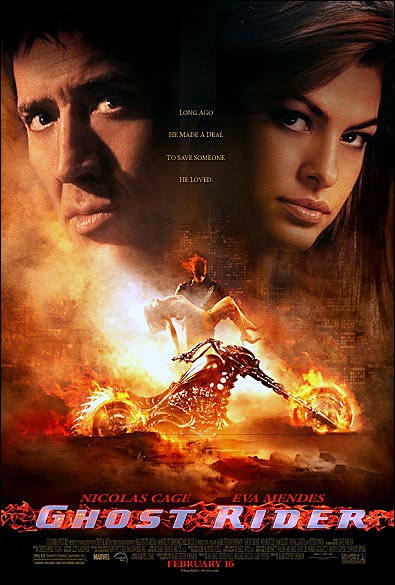 "Ghost Rider" is a 2007 based on the fictional character of the same name. The film is directed by and stars as Johnny Blaze / Ghost Rider.

This film was rated PG-13 by the MPAA for "horror violence and disturbing images".

In the days of the , Mephistopheles () sent his of the damned, the Ghost Rider, to retrieve a contract for a thousand corrupt s from the town of San Venganza. Because such a large amount of souls would cause if taken on by one demon, the Rider refused to give the contract — and therefore, the souls — to Mephistopheles; instead, he outran Mephistopheles and hid himself and the contract.

A century and a half later, Mephistopheles reaches out to seventeen-year-old stunt motorcycle rider Johnny Blaze (/), offering to cure his father's in exchange for Johnny's soul. Johnny inadvertently signs the contract when a drop of his blood lands on it. His father's cancer is cured, but he dies that same day in a horrific bike crash. Johnny accuses Mephistopheles of causing his father's death, but Mephistopheles considers their contract fulfilled. Years later, Johnny has become a stunt rider famous for walking away from crashes unharmed.

Before a particularly dangerous new stunt, Johnny meets his childhood sweetheart Roxanne (/), now a journalist, and holds a dinner date with her that evening. At the same time, (), Mephistopheles' son, comes to Earth to find the lost contract and use its power to overcome his father. He calls forth the fallen angels known as the Hidden, a trio of demon spirits who represent three of the four elements — the water elemental Wallow (Daniel Frederiksen), the earth elemental (Laurence Breuls), and the air elemental Abigor (Mathew Wilkinson) — to act as his allies. In response, Mephistopheles makes Johnny the new Ghost Rider, offering Johnny his soul in return for defeating Blackheart. Johnny confronts Blackheart at a train station where the contract was once buried, and kills Gressil while the others escape. On his way out, he uses his 'Penance Stare', a supernatural ability which sears the pain of all whom a person has harmed into the wrongdoer's soul, on a mugger, leaving the man catatonic.

The next day, Johnny wakes up in a cemetery chapel, where he meets a man called the Caretaker (), who seems to know all the history of the Ghost Rider. When he arrives home, Johnny finds Roxanne and tries to explain his situation, which is why he missed their date. She leaves in anger and disbelief at his tale. The police arrive and take Johnny into custody for his connection to the damage done to the city and the deaths caused by Blackheart. He transforms into Ghost Rider in the cell and escapes to track down Blackheart. He fights and kills Abigor, in full view of Roxanne and much of the police force. Observing the scene after obtaining the location of the contract, Blackheart realizes that Roxanne is Johnny's weakness.

Johnny goes for advice to the Caretaker, who tells him of his predecessor, Carter Slade, a Texas Ranger who was a man of honor before his greed placed him before the gallows for his misdeeds. Slade made a deal with Mephistopheles to break free; in return, Slade became the Ghost Rider who hid the contract of San Venganza. The Caretaker then warns Johnny to stay away from those whom Blackheart and the fallen angels can use against him. This advice is too late; Johnny returns home to find that Blackheart already has Roxanne. During their resulting fight, Johnny finds that his Penance Stare has no effect on Blackheart, who has no (human) soul. Blackheart threatens to kill Roxanne if Johnny does not deliver the contract to him.

Johnny returns to the Caretaker to obtain the contract. Though reminded of the consequences, Johnny asks the Caretaker to trust him. The Caretaker then reveals that he is Carter Slade, having held on to his last bit of power in expectation of this moment. He informs Johnny that God is on his side because he made his deal with Mephistopheles because of love rather than greed or desperation, and shows Johnny the way to San Venganza. They ride together into the desert in Ghost Rider form. They stop a short distance from the town, and Slade gives Johnny his shotgun and the warning to "stick to the shadows" before fading away.

After killing Wallow, the last of the Hidden, Johnny gives the contract to Blackheart. He quickly transforms into Ghost Rider in an effort to subdue Blackheart, but dawn comes and he is rendered powerless. Blackheart uses the contract to absorb the 1,000 souls into his body, taking the name "Legion." Legion is now more than a match for Johnny, but is distracted when Roxanne uses Johnny's discarded shotgun to separate them. After she fruitlessly fires off its remaining ammunition, Johnny takes the gun and moves it into the shadows. This allows him to create a "hellfire shotgun" to blast Legion apart. Legion reforms, but Johnny moves in and uses his Penance Stare, made effective by the thousand souls inhabiting Legion's body, to render him catatonic. Johnny turns away from Roxanne, ashamed of his monstrous appearance, but she shows him that she is not afraid of what Johnny has become.

Mephistopheles appears and gives Johnny his soul, offering to take back the curse of the Ghost Rider. Johnny refuses, saying that he will use his power against Mephistopheles, and against all harm that comes to the innocent. Infuriated of being robbed of the power, Mephistopheles vows to make Johnny pay, to which Johnny in response recites his favorite saying: "You can't live in fear." Mephistopheles then disappears, taking Blackheart's body with him. Johnny and Roxanne share some parting words at the tree on which Johnny carved "J&R FOREVER" at the beginning of the film. Roxanne then tells Johnny that he got his second chance before sharing a final kiss with him. Johnny then rides away on his motorcycle, now a legend in his own right. The film concludes with a rendition of the song "".

In the following August, Norrington abandoned the project due to a scheduling conflict, leaving to film the action flick "Tick Tock" starring . [cite news | author=James Berkshire | url= | title=Cage GHOST RIDER Burning Out? | publisher=Cinescape | date= | accessdate=2006-12-22 ] Cage eventually left the project as well. By May 2002, the studio sought to acquire rights to the film in turnaround from Dimension Films following the success of "Spider-Man". [cite news | author= | url= | title=`Ghost Rider' could follow Spidey film | publisher= | date= | accessdate=2006-12-22 ] In April 2003, under Columbia Pictures, director took over the helm for "Ghost Rider" with Cage returning for the lead role. Both had been drawn by a script written by screenwriter . Johnson, rewriting Salerno's script, was set to begin production of "Ghost Rider" in late 2003 or early 2004. [cite news | author=Dana Harris | url=http://www.variety.com/index.asp?layout=story&articleid=VR1117884327&categoryid=13&cs=1 | title=Johnson sees 'Ghost' | publisher=Variety | date= | accessdate=2006-12-22 ] With production delayed into October 2003, Cage took a temporary leave of absence to film "". "Ghost Rider" production was slated to tentatively begin in May or June 2004. [cite news | url=http://www.superherohype.com/news/ghostridernews.php?id=287 | title=When May "Ghost Rider" Start Shooting? | publisher=SuperHeroHype.com | date= | accessdate=2006-12-22 ]

Instead of a "hard drinking and smoking bad ass" Johnny Blaze, Nicolas Cage decided to give him more depth. "I'm playing him more as someone who... made this deal and he's trying to avoid confronting it, anything he can do to keep it away from him". Cage also explained that Blaze's stunt riding was a form of escape and a way to keep him connected to his deceased father, who taught him to ride. Cage rode a Buell motorcycle for Blaze's stunt cycle, and a heavily customized hardtail chopper named "Grace" which transforms into the "Hell Cycle". [cite news | author=Andrew Weil | url=http://www.superherohype.com/news/featuresnews.php?id=3153 | title=SET VISIT: Nicolas Cage on "Ghost Rider"! | publisher=SuperHeroHype.com | date= | accessdate=2007-01-29 ] The Hell Cycle's wheels, made of pure flames in the comics, were changed to be solid tires covered in flames in order to give the motorcycle more weight onscreen.

Ghost Rider's flames were designed to become smaller and to display any other than rage. The film's visual effects supervisor, , and the visual effects team at handled the difficult task of creating computer-generated fire on a shot-by-shot basis. Ghost Rider's voice was manipulated by sound designer Dane Davis, who won an for "". Davis filtered Cage's line readings through three different kinds of animal growls that were played backwards and covered separate frequencies. Davis then amplified the dialogue through a mechanical volumizer. Director Johnson described the sound as a "deep, demonic, mechanical lion's roar". [cite news | author= | url=http://www.superherohype.com/news/ghostridernews.php?id=3374 | title=Mark Steven Johnson on "Ghost Rider"! | publisher=SuperHeroHype.com | date= | accessdate=2007-01-29 ]

On , , confirmed that in America the film will be issued on June 12, 2007 as a single-disc Theatrical Cut , two-disc Extended Cut DVD, , and UMD. Special features on the Extended Cut DVD include two commentary tracks, a comic book history feature, and a making of the film featurette. [cite news | author=Sony Pictures | url=http://www.superherohype.com/news/topnews.php?id=5526 | title="Ghost Rider" DVD Cover Artwork | publisher=SuperHeroHype.com | date= | accessdate=2007-05-13 ]

This is the official soundtrack was composed by and released by Varese Sarabande Records.

A video game based on the movie was developed by and produced by and was released for the , PSP and in the , , and in . No versions were released in . The game is based loosely on the movie, and features a storyline penned by writers and . In all versions, players can play as Ghost Rider both on foot, or on the Hellcycle. The version released for PS2 and PSP is a third person action game that features gameplay reminiscent to that of "God of War". The version is a sidescroller, with gameplay similar to "" and "".