Marc Seguin (April 20, 1786 - February 24, 1875) was a French engineer, inventor of the wire-cable suspension bridge and the multi-tubular steam-engine boiler.

Born in Annonay, Ardèche to Marc François Seguin (founder of Seguin & Co.) and Thérèse-Augustine de Montgolfier (niece of Joseph Montgolfier), he was an inventor and entrepreneur. He developed the first suspension bridge in continental Europe, building and administering toll-bridges for a total of 186 bridges throughout France.[1] 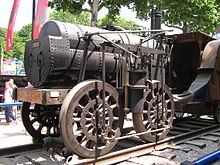 Shortly after the Stockton and Darlington Railway in England opened (1825) he visited it and observed George Stephenson's Locomotion in operation. In 1829, he delivered two steam locomotives of his own design to the Saint-Étienne–Lyon railway.[2] These used an innovative multi-tube boiler and also prominent mechanically driven fans to provide draught on the fire, rather than the blastpipe that was coming into common service at this period. This boiler resembled the later Scotch marine boiler in some aspects, in that the boiler had a large single flue from the furnace, then many small-diameter firetubes returning to a chimney above the firebox door. Uniquely, Seguin's design also arranged the furnace in a large square water-jacketed firebox beneath the boiler to provide a large grate area and greater heating capacity. Robert Stephenson had also made the same decision with his Rocket, but placed his firebox separately and behind the main boiler shell.[2] Seguin's boiler enabled steam-engine trains to increase power and velocity from 4 miles per hour to 25 miles per hour making railroad a more viable mode of transportation. Later he would collaborate with George Stephenson[citation needed] to help[citation needed] him win the speed contest at Rainhill Trials, where Stephenson's Rocket won using the fire-tube boiler.

Inventor but also entrepreneur, teaming with his brothers, Camille, Jules, Paul and Charles, as well as his brother in law Vincent Mignot he continued his father's successful business in textiles, paper, gas-lighting, coal mines, construction and added to it a railroad company and a bridge construction business.

Marc Seguin was voted into the Académie des Sciences in 1845, received the Légion d'honneur in 1836 and wrote numerous books on the use of physics and mathematics in building bridges and locomotives engines. His name is one of the 72 names inscribed on the Eiffel Tower.