The Toll of the Sea

The Toll of the Sea 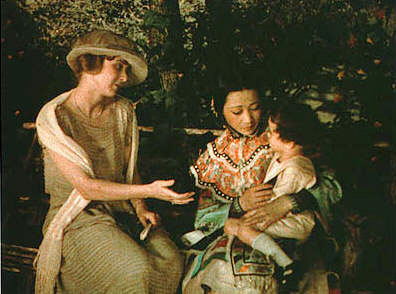 name = The Toll of the Sea
director = Chester M. Franklin
producer = Herbert T. Kalmus
writer =
starring =
music =
cinematography =
editing =
distributor = Metro Pictures Corporation
released =
runtime = 53 min.
language = English
budget =
imdb_id = 0013688
amg_id = 1:114016| "The Toll of the Sea" is a motion picture produced by the Technicolor Motion Picture Corporation, and released by Metro Pictures in 1922, featuring in her first leading role. It was the seventh color feature, [Earlier color features: "" ("The Durbar at Delhi") (1912), "The World, the Flesh and the Devil" (1914), and "Little Lord Fauntleroy" (1914), all in ; "The Gulf Between" (1917), in Technicolor; "" (1918), in Douglass Natural Color; and "The Glorious Adventure" (1921), in color.] the second feature, the first color feature made in , and the first color feature anywhere that did not require a special projector to be shown. The survives except for the final reel. In 1985 the preserved the film from the original 35 mm nitrate negative. Because modern film technology was used to create a color print instead of the original Technicolor Process 2, which involved cementing together two film strips base to base, the resulting image quality is likely better than the original prints appeared [http://www.imdb.com/title/tt0013688/alternateversions] .

When young Lotus Flower sees an unconscious man floating in the water near the seashore, she quickly gets help for him. The man is Allen Carver, an American visiting China. Soon the two have fallen in love, and Carver promises to take her with him when he returns home. But Carver's friends discourage him from doing this, and he returns to the USA alone. By the time the two of them meet again, much has changed, and their reunion proves very trying for them both. [http://imdb.com/title/tt0013688/plotsummary]

"The Toll of the Sea" was written by and directed by Chester M. Franklin, with the lead roles played by and Kenneth Harlan. The plot was a variation of the Madame Butterfly story, set in China instead of Japan.

The restored version is available as one of the titles included in the 4-DVD box-set "Treasures from American Film Archives, 50 Preserved Films" [http://www.filmpreservation.org/dvd/treasures.html] .