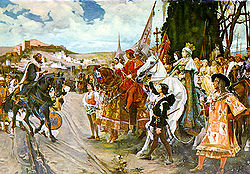 Muslims surrender to Spain: Boabdil gives the Granada key to Ferdinand and Isabella

General Percival marches to surrender 80,000 British troops after the Battle of Singapore in World War II. 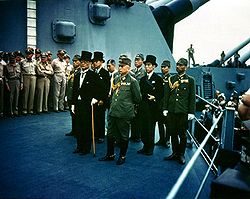 Surrender is when soldiers, nations or other combatants stop fighting and eventually become prisoners of war, either as individuals or when ordered to by their officers. A white flag is a common symbol of surrender, as is the gesture of raising one's hands empty and open above one's head.

When the parties agree to terms, the surrender may be conditional, i.e. if the surrendering party promises to submit only after the victor makes certain promises. Otherwise it is a surrender at discretion (unconditional surrender); the victor makes no promises of treatment other than those provided by the laws and customs of war — most of which are laid out in the Hague Conventions (1907) and the Geneva Conventions. Normally a belligerent will only agree to surrender unconditionally if completely incapable of continuing hostilities.

The Third Geneva Convention states that prisoners of war should not be mistreated or abused. United States Army policy, for example, requires that surrendered persons should be secured and safeguarded while being evacuated from the battlefield. Similar regulations exist in most modern militaries.

Entire nations can also surrender in an attempt to end a war or military conflict. This is done through an unconditional capitulation or the signing of a treaty, such as an armistice or peace treaty.