The Nishan Sahib is a Sikh holy triangular[1] flag made of cotton or silk cloth, with a tassel at its end. The word, Nishan means symbol, and the flag is hoisted on a tall flagpole, outside most Gurudwaras. The flagpole itself covered with fabric, ends with a two-edged dagger (khanda) on top. The emblem on the flag is known as Khanda, which depicts a double-edged sword called a khanda (☬) in the centre, a chakkar which is circular, and flanked by two single-edged swords, or kirpans.

Traditional symbol of the Khalsa Panth, the Nishan Sahib can be seen from far away, signifying the presence of Khalsa in the neighbourhood. It is taken down every Baisakhi, and replaced with a fresh flag, and the flagpole refurbished.

The background colour of the Nishan Sahib during the early phase of Sikh history was red. Its colour underwent a change, from white to saffron, in the hands of Guru Hargobind and it was hoisted for the first time at Akal Takhat Sahib in the year 1609 CE. However, it is steel blue in colour at Gurudwaras managed by Nihangs. 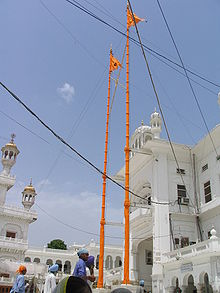 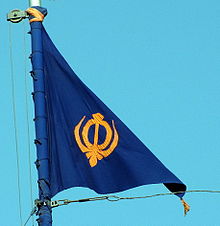 The Nishan Sahib is placed outside every Sikh Gurdwara and is supported by a pole of timber or metal.

The Khanda, a Sikh symbol, is rendered in blue on the saffron background. The khanda is placed high up on a flagpole as a sign for all Sikhs and indeed any other people that they can come and pray in this building. Great respect is shown to this flag which is shown by its washing using milk and water every year in April at the festival of Vaisakhi. The Nishan Sahib is changed once the saffron color has faded.

Like a Flag of any institution, this Flag symbolizes the presence of the Khalsa and hence is hoisted at every Gurdwara premises. Therefore, anybody in need of help. However, with the Khalsa now being non-functional, the Gurdwaras serve the purpose of congregational meeting, Langar and lodging.