Later engraving of a picture commissioned in 1519 showing Cædwalla confirming a grant of land, at Selsey, to Wilfrid. The position of the presentation is probably where the Mixon is today based on the location of the church in the top left of picture ( at Church Norton).[3]

The account of Ælle and his three sons landing at Cymenshore, in the Anglo Saxon Chronicle, marks the legendary beginning of Saxon Sussex.[2][4][5]

The chronicle goes on to then describe Ælle's battle with the British in 485 AD near the bank of Mercredesburne, and his siege of Pevensey in 491 after which the inhabitants were massacred.[6][7] The Anglo-Saxon Chronicle is a collection of seven vernacular manuscripts, commissioned in the 9th century, some 400 years or more after the events at Cymenshore and it is likely that the information on these early dates was provided by an oral tradition.[8][9] There is very little recorded information after 491 about Sussex until the arrival of Christianity in the 7th century.[10]

The scarce information about early Sussex derived from the chronicle has been supplemented by what was happening elsewhere in England and by a growing body of archaeological evidence.[10]

Towards the end of the Roman occupation of England, raids on the east coast, mainly by Picts, became more intense, and the expedient adopted by Romano-British leaders was to enlist the help of Anglo-Saxon mercenaries to whom they ceded territory.[10] Gildas said that the king of the Britons Vortigern invited the Saxons in among them like wolves into the sheep-fold.[11] It is thought that mercenaries may have started arriving in Sussex as early as the 5th century. [10][12]

Archaeological evidence suggests that the main area of settlement during the 5th century can be identified by the distribution of cemeteries of that period [13] Apart from Highdown, near Worthing and Apple Down, 11 km northwest of Chichester, they are between the lower Ouse and Cuckmere rivers in East Sussex.[10][14] This area was believed to have been for the treaty settlement of Anglo-Saxon mercenaries [15]

Bell suggested that subsequently Ælle seems to have tried to break out of the treaty area and in about 465 he fought the battle of 'Mearcredesburne', one translation of which is 'river of the frontier agreed by treaty'.[10] The chronicle does not tell us who won the battle, but with the taking of Pevensey in c 471 Ælle extended his territory up to the Pevensey Levels. East of the Levels was an area independently settled by the Haestingas, a people whose territory continued to be regarded as an area apart from the rest of Sussex as late as the 11th century.[10] No pagan cemeteries have been found in this region, and this is an indication that they were already Christian when they arrived.[16] As far as the west of the Arun Valley is concerned, this includes Selsey and Chichester, to date there have been no archaeological finds of the early Anglo-Saxon period.[15] The only known pagan Saxon burials are at Pagham (7th or 8th century AD) and Apple Down.[14]

Although there is no archaeological evidence for Ælle's existence or his invasion, there is some lexical evidence for the existence of Cymensora, the place where the Anglo-Saxon Chronicle AS 477 say he landed.[17][5] The word ora is found only in placenames where Jutish and West Saxon dialects were in operation (mainly in southern England). [18] It is possible that the stretch of low ground along the coast from Southampton to Bognor was called Ora "the shore", and that district names were used by the various coastal settlements.[18] They include Ower near Southampton, Rowner near Gosport, Copnor in Portsmouth, Marker in West Thorney, Itchenor, Chalder Farm, Keynor Farm, Honer in Pagham and Bognor.[18] According to the Anglo Saxon Chronicle Cymensora is named after Cymen, one of Ælle's sons and thus would mean Cymen's landing place or shore.[2][17][5] 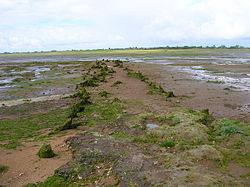 The Selsey area, is traditionally the most popular candidate for Cymenshore. The tradition is based largely on two charters that refer to a place with a similar name in the boundary clause to that cited in the Anglo-Saxon Chronicle.[2][19][20][21] The charter that defined the land award to St Wilfrid at Selsey, in the 7th century, by King Caedwalla is actually a 10th century forgery.[19] The relevant section of the forged charter, says (in Latin):

and the translation is:

"from the entrance of the harbour which is called in English Wyderinges round where the sea falls back at Cumenshore then towards the western shore at Rumbruge.."

A further source is from the Charter of Byrhthelm , which is believed to be genuine and is to do with some land that had been seized from the See of Selsey, it confirms that the boundary is from Wytherings Mouth and Cymenshoran in the east to Hormouth in the west:

Rumbruge/ Rumbridge (alias "thri beorg"- three barrows and is now the Medmerry Bank), is believed to have been an islet and trading port off the southwest coast of the Manhood Peninsula, that has long since succumbed to the sea and Wytherings mouth was part of what is now Pagham Harbour.[23][24][25]

Pagham Harbour currently is a nature reserve, however in earlier times was a working harbour with three ports, one at the western end at Sidlesham Mill known as Wardur, one at the other at the entrance to the harbour and known as Charlton and one on the Pagham side known as the Port of Wythering (Wyderinges).[26][27] The port of Wardur was part of 'New Haven' a development in the Middle Ages.[28] The Port of Wythering was overrun by the sea in the 13th century and the whole harbour eventually silted up and ceased to be navigable, except for small craft.[29] 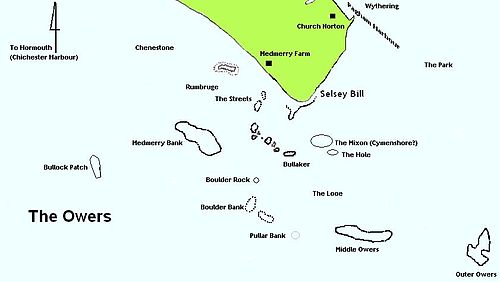 Some historians such as Hunter-Blair identify the Outer Owers and Middle Owers as the landing place for Ælle.[20] However this is problematical as the coastal erosion pattern means that this section of the Owers would not have been part of the shoreline for at least 5000 years.[33] The Outer Owers are approximately 11 km off Selsey Bill and the erosion pattern suggests that the shore would have been 2 – 3 km seaward 5000 years ago.[31][33]

Camden's description of Selsey and the ancient little City[34]

To the south of Selsey Bill lies the Mixon rocks.[31]

It is believed that, in the Iron Age, the Atrebates (one of the Belgae tribes) built their Oppidum in the Selsey area and Richardson speculates that the Mixon could be the site of Cidade Celha (the Old City) and therefore Cymensora.[24][35][36][37][38]

The archaeological evidence demonstrates that the Mixon would have been the shoreline during the Roman occupation, with it not being breached by the sea until the 10th or 11th century.[39] [40][41] As late as the 17th century, it was reported that the remains of the ancient little city could be seen at low tide.[34]

The Manor of Keynor is situated at the western end of Pagham Harbour.[42] Selsey based historians Edward Heron-Allen and Francis Mee favour the Keynor area of Sidlesham for Cymenshore, they suggest that the name Keynor is derived from Cymensora.[43][44] However Margaret Gelling asserts that Keyn-or actually means Cow - Shore in Old English.[45]

Welch believes that the location for Cymenshore is more likely to be in the Ouse-Cuckmere area of East Sussex, his reasoning is that there is no archaeological evidence to support a landing at Selsey.[15] However Richardson states that the place names with the Old English, ora element of Cymensora are very common along the Hampshire and West Sussex coastline but not around the Ouse-Cuckmere area.[46] There is also a suggestion that the archaeology off the Selsey coast has just not been fully realised yet[47] 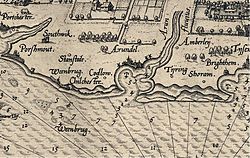 Shoreham has also been cited as a possible location, for example in 1906 Hilaire Belloc in his Hills and the Sea when discussing St Wilfrid he said:

...But those memories were getting worse and worse, for it was nearly two hundred years since the ships of Ælle had sailed into Shoreham ,which showed him to be a man of immense determination, for it is a most difficult harbour, and there were then no piers and lights)--it was nearly two hundred years, and there was only the least little glimmering twilight left of the old day.[49]