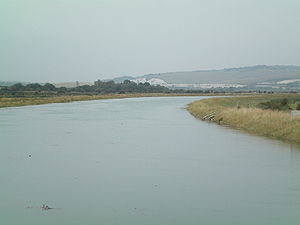 /ˈuːz/ ooz) is a river in the counties of West and East Sussex in England.

The river rises near Lower Beeding and runs eastwards into East Sussex, meandering narrowly and turning slowly southward. A number of tributaries join it near the village of Isfield, and more at Barcombe Mills, where it is used by Southern Water along with neighbouring Barcombe Reservoir, and there are many weirs and bridges. Just north of this, the Anchor Inn is on the banks of the river, and canoes can be hired from here. Continuing on from Barcombe, the Ouse really starts to meander (leaving several ox-bow lakes) as it reaches Hamsey, where the meander has been cut short by a canal creating Hamsey Island, home to St. Peter's Church, which is situated on a mount. Then the river flows through the town of Lewes, where it has been converted considerably over history. Three bridges cross it at Lewes: Willey's Bridge (a small footbridge opened in 1965), the Phoenix Causeway (a larger road bridge named after the extinct Phoenix Ironworks), and Cliffe Bridge (which is much older). After Cliffe the Winterbourne stream flows into the Ouse and the main river is banked on the west by the Heart of Reeds. The Ouse courses southeast past Glynde, where the tributary of Glynde Reach gushes into it; and then passes Rodmell, Southease (where there is a locally famous bridge) and Piddinghoe, finally reaching Newhaven, where it splits industrial Denton Island from the mainland and provides an important harbour, and then flows into the English Channel, surrounded on either side by two long breakwater piers.

'Ouse' is a very common name for rivers in England (e.g. the Ouse in Yorkshire), stemming from a Celtic word for water.[1]

The Sussex Ouse, on the other hand, derives its name from a back-formation of "La Rivière de Lewes".

The Ouse is one of the four rivers that cut through the South Downs. It is presumed that its valley was cut during a glacial period, since it forms the remnant of a much larger river system that once flowed onto the floor of what is now the English Channel. In the warmer interglacials the lower valley would have flooded; there are raised beaches 40 metres (Goodwood-Slindon) and 8 metres (Brighton-Norton) above present sea level. The offshore topography indicates that the current coastline was also the coastline before the final deglaciation, and therefore the mouth of the Ouse has long been at its present latitude.[2]

The behaviour of the Ouse and the conditions in its valley have been determined by its exit to the English Channel between Seaford and Newhaven. Eastwards longshore drift has built up and continuously replenished a shingle spit (shoal) at the mouth of the Ouse. In periods when the Ouse has been relatively unimpeded the river has drained the Lewes Levels. In periods when the spit has obstructed the mouth of the river, the river valley has been inundated.[2]

At Domesday (1086), the Ouse valley was probably a tidal inlet with a string of settlements located at its margins. In later centuries the Ouse was draining the valley sufficiently well for some of the marshland to be reclaimed as highly prized meadow land. The outlet of the Ouse at Seaford provided a natural harbour behind the shingle bar.[2]

However, by the 14th century the Ouse valley was regularly flooding in winter, and frequently the waters remained on the lower meadows through the summer. In 1422 a Commission of Sewers was appointed to restore the banks and drainage between Fletching and the coast, which may indicate that the Ouse was affected by the same storm that devastated the Netherlands in the St Elizabeth's flood of 1421. Drainage became so bad that 400 acres (1.6 km2) of the Archbishop of Canterbury's meadow at Southerham were converted into a permanent fishery (the Brodewater) in the mid-15th century, and by the 1530s the entire Lewes and Laughton Levels, 6,000 acres (24 km2), were reduced to marshland again.[3]

Prior Crowham of Lewes Priory sailed to Flanders and returned with two drainage experts. In 1537 a water-rate was levied on all lands on the Levels to fund the cutting of a channel through the shingle bar at the mouth of the Ouse (below Castle Hill at Meeching) to allow the river to drain the Levels. This canalisation created access to a sheltered harbour, Newhaven, which succeeded Seaford as the port at the mouth of the Ouse.[4]

The new channel drained the Levels and much of the valley floor was reclaimed for pasture. However, shingle continued to accumulate and so the mouth of the Ouse began to migrate eastwards again. In 1648 the Ouse was reported to be unfit either to drain the levels or for navigation. By the 18th century the valley was regularly inundated in winter and often flooded in summer.[2] 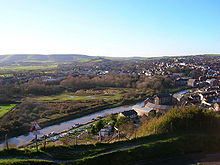 This straightened tidal stretch of the River Ouse just south of Lewes is called Cliffe Cut. It was made when the Ouse was canalised in the late 1790s. The original course of the river meandered in the foreground.

In 1787, William Jessop was asked to survey the river with a view to extending navigation right up to Slaugham. Three years later the Upper Ouse Navigation Act was passed, enabling construction upon the navigation to begin. However, the initial estimates of cost were soon exceeded, and work slowed. Eventually, about 1812, the canalisation of the Ouse was completed, and the river was navigable from Lewes up to Balcombe, West Sussex, the navigable part of the river terminating at Upper Ryelands Bridge. The navigation totalled 22 miles (35 km) in length, plus a 3/4 mile branch to Shortbridge, and featured 19 locks.[6]

Trade along the Ouse Navigation consisted mostly of lime, chalk, manure, aggregates and coal. Whilst in 1801 there were 51 barges registered as trading on the river (21 of which worked the river above Lewes), the navigation was never a huge commercial success. During the 1840s, as railways proved to be a cheaper and faster method of transporting goods, attempts were made to attract more trade by reducing tolls, but this had little effect and by 1868 all trade above Lewes had ceased, although boats continued working on the Lower Ouse to Lewes right up to the 1950s.[7]

Today, the remains of most of the old locks are still visible, although all are now slowly deteriorating. The Sussex Ouse Restoration Trust is promoting renovating the navigation.[8]

Southease swing bridge was built in the 1880s, is the second bridge on the site and though the swing mechanism remains, it has not been opened since 1967.[9]

There is at present a lot of research into the presence and effects of organic and inorganic pollutants in the Sussex Ouse. The nature of the river is that sediment in high-flow areas is absent, with the exception of the Denton Island area. In 2001 the river flooded, placing areas of the river towns Lewes and Uckfield under water. Lewes Brooks is a Site of Special Scientific Interest to the south of Lewes and the west of the river.

The river is known for the unusually large Sea Trout that migrate up the river twice a year to spawn. The river also contains large Pike and more recently large Carp (both to weights in excess of 30 pounds). Other species include Barbel, Roach, Dace, Rudd, Minnow, Perch, Chub, Bream and Tench. Recently Pumpkinseed have shown up in small numbers and since 2008 a few Catfish have appeared in the river at and upstream of Lewes. The tidal stretches also contain Flounder as far inland as the tidal limit, Bass upstream to Lewes, and Mullet.

Today the Ouse is managed by the Environment Agency and is utilised as a source of drinking water and as a conduit for treated sewage as well as providing drainage for the surrounding area. It has reverted to its tidal state up to Barcombe Mills and its banks have been raised in an attempt to stop flooding. From Barcombe Mills to the sea the river has long posed a problem with flooding, as was so forcefully demonstrated in 1960, and more recently in October 2000.

The author Virginia Woolf drowned herself in the River Ouse on 28 March, 1941, near the village of Rodmell. On 18 April, her body was recovered from the river.[10]

The Ouse Summer Raft Race is held annually, and organised by the Lewes & District Round Table. Competitors construct their own rafts and paddle down the river, from Lewes to Newhaven. At Lewes and Southease, the rafters are pelted by crowds on the bridge and riverbank with eggs, flour, seaweed, and water.[11]