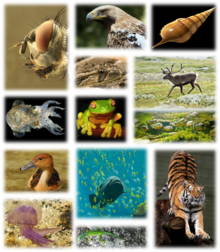 Examples of the biodiversity of the Earth.

The biodiversity of planet Earth is the total variability of life forms forms. Currently about 1.9 million species are known, but this is thought to be a significant underestimate of the total number of species.

Biodiversity has grown and shrunk in earth's past due to changes abiotic factors such as mass extinction, change in oxygen levels and sea levels. Climate change 300 million years ago was one such event. A cooling and drying resulted in catastrophic rainforest collapse and subsequently a great loss of diversity, especially of amphibians.[1]

Current threats to global biodiversity include natural extinction, an event that occurs to species yearly, as well as human actions such as pollution. Invasion of non-native species can also have a negative affect on global biodiversity.

Biodiversity is usually plotted as the richness of a geographic area, with some reference to a temporal scale. Types of biodiversity include:

Taxonomic diversity, that is the number of species, genera, family is the most commonly assessed diversity type.[2] A few studies have attempted to quantitatively clarify the relationship between different types of diversity. For example, Sarda Sahney a researcher at the University of Bristol has found a close link between vertebrate taxonomic and ecological diversity.[3]

Insects make up the vast majority of animal species.

The numbers of identified modern species as of 2010 can be broken down as follows:[4]

Estimates of total number of species

However the total number of species for some taxa may be much higher.

It is interesting to mention that according to the school of Indian philosophy known as(Vedanta) there are 8.4 million types of living beings on earth.[9] This statement was made more than 1000 years ago.