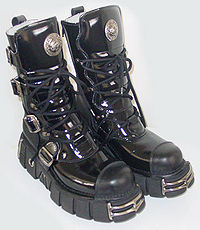 A pair of New Rock boots

New Rock is a Spanish shoe and clothing company that make several types of biker/goth style boots, shoes and clothes (though they do have some designs that may not be considered gothic).

New Rock also sell a line of clothes, most of which are made of leather. These are not so widely available as their footwear line, but can be purchased from the New Rock internet store and the New Rock store in Camden and official partner newrockshoes.net. Most of their clothes are made to fit in with a style of boot, for example there is a leather jacket and pair of leather trousers available with flames up the side, which is a style shared by some of New Rock's boots.

There has been debate about the quality of the product and whether the price is worth it, with some people saying the boots are badly made and fall apart easily, and others saying they are highly durable.

A common fault or weak point seems to be the metal heel back plates snapping around the holes cut in them.

There are several lines of New Rock products, including (but not limited to) 'Gothic' boots and shoes, motorcycle style boots, Western/Cowboy Boots, high-heeled boots, formal shoes and boots, and New Rock trainers.

Each style group has its own special name that New Rock have given to it, for example the high heels are in the 'Malicia' style, and the Gothic style boots are in the range 'Metallic Power'.

There are also several critics of New Rock who have noted how similar many pairs of New Rock shoes look. Most notably, Gothic musician Voltaire who mentions New Rock products as a symbol of uniformity in "The Industrial Revolution (And How It Ruined My Life)."