That Mitchell and Webb Sound

That Mitchell and Webb Sound 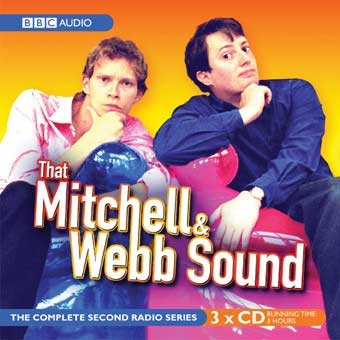 "That Mitchell and Webb Sound" is a comedy sketch show on which started on . A second series was broadcast in with a third starting on . The series became adapted for television as "" in . The series is seen in some ways a follow-up to "", a sketch show shown on in 2001.

The series stars David Mitchell and Robert Webb who also write a fair amount of the material. Also performing in the show are and regular Mitchell and Webb collaborator .

Apart from Mitchell and Webb, a fair proportion of the sketches are written by the other cast members and other writers. These include and (the writers of "Peep Show", in which Mitchell and Webb star), Mark Evans, , Jonathan Dryden Taylor, and .

Unlike other recent comedy sketch shows commissioned by Radio 4 such as "", the series does not tend to rely on exaggerated characterisations. Some sketches make use of the personas Mitchell and Webb use in the series "Peep Show" - Webb's character enthusiastic but prone to sarcasm and Mitchell occupying a more world weary and long suffering role - but the programme showcases the pair's considerable versatility.

The series has no fixed format but there are a number of recurring scenarios and sketch formats. Most of the recurring characters appear in the first two series.

* - a parody of television commentary. Ted and Peter (Mitchell and Webb respectively) are a pair of jaded ex-players, whose voiceover trails off from describing the game, revealing more than they should about their personal lives and the murky behind-the-scenes, hard-drinking, hard-fighting, dog-eat-dog world of the sport and its commentators.

* The Party Planners - Mitchell and Webb prepare a party guest list, and realise that one of the guests will bring along a famous literary or historical figure (though the duo are unaware of the guest's fame in the context of the sketches). An extra twist is that positive figures are usually described as party wreckers and infamous figures are celebrated. The arrival of is dreaded ("So I say, 'Do you want a glass of wine, James, or there's beer in the fridge?' Prat asks for a martini!") while Hitler is welcomed ("Oh, I do love it when he goes off on one"). Other guests have included , and the Mystery Inc. gang of .

* Imagine That - A parody of intelligent panel shows. A set of intellectuals are asked to conceive of various bizarre ideas, such as "the biggest jacket potato they can think of." One episode was mistakenly called "Imagine Hat", due to "a printing error in the ". The panelists therefore had to imagine a hat. Mitchell's character, Professor David Trussell, is slightly deranged. This is the only recurring sketch to appear in all three series.

*Adrian Locket - Adrian (Mitchell) is a weary late-night local radio DJ who harbours no illusions about his audience. His life is as about as lonely and dark as the hours he works.

*The Lazy Film Writers - A parody of film genres. The lazy film writers can never be bothered to think of something new for their next film, so they take the bits out one genre that everyone recognises, and make their own, rather rubbish film. For example, they made a sports film, which was basically a poor combination of films such as "Wimbledon" and "". The film even mentions a mill called "Postlethwaite," which is probably named after who starred in "Brassed Off."

*The Surprising Adventures of Sir Digby Caesar-Salad - Characters in Series 1 and 3. Sir Digby (Webb) and his sidekick Ginger (Mitchell) believe that they are a pair of detectives in the style of and when in fact they are drunken tramps. They are so poor that they have to hum their own theme tune (""), which is usually sung as the intrepid duo are escaping from a crime scene, and regularly fight each other for loose change. They believe that plots are constantly being hatched against them by their "nemesis" described as "some bastard who is presumably responsible". Henchmen of their nemesis turn up in the shape of the police or whoever stumbles in front of them. When the series transferred to television, Sir Digby was renamed Sir Digby Chicken Caesar, and he kept this name for the third radio series. In series three, Sir Digby thought his nemesis had contaminated a water supply, which lead him to investigate a brewery.

*Jason, the New Presenter - A recurring character in Series 1, played by Webb. Jason originally appeared in a fly-on-the-wall documentary where he almost killed himself, as a result of which, he became the star of the show. As a result, he now presents a wide range of make-over shows. Jason tends to be rather insensitive, and concerned only with himself and his fame. As a result, he tends to insult his guests.

*Little Date - A series of sketches in Series 3. Webb plays a man who has a different job in every sketch, who encounters a woman (Colman) whom he verbally attacks, mocks and ridicules until she cries. When the woman is as crying, Webb then asks her out on a "little date," to which the woman always agrees, in the hope of feeling better.