Color TV Game (カラー テレビゲーム, Karā Terebi Gēmu?) is a series of home dedicated consoles created by Nintendo. There were five different consoles in the series, all developed and released in Japan. 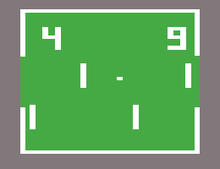 The series debuted in 1977 with the Color TV Game 6 (カラー テレビゲーム6, Karā Terebi Gēmu Roku?).[1][2] It contained six variations of "Light Tennis" (or Pong). The players controlled their paddles with dials attached directly to the machine. Additionally, as an alternative to the standard version, a white-colored C Battery powered model of the Color TV Game 6 was introduced. With a limited run of only a few hundred units, these white colored units are largely considered to be the most prized by serious collectors.

In 1978, Nintendo released the Color TV Game 15 (カラーテレビゲーム15, Karā Terebi Gēmu Jū Go?). With the two controllers now on cables (making for much more comfortable play) and 15 slightly different versions of Light Tennis, the CTG 15 sold over a million units. Two models of the CTG 15 were released, the only difference between the two being a slight color tint change. The lighter orange version is considered significantly more difficult to find by collectors, while the dark orange version is somewhat more common.

The "Color TV Game Block Breaker" (カラーテレビゲームブロック崩し, Karā Terebi Gēmu Burokku Kuzushi?) was released in 1979; the 1-player console ran a ported version of "Block Breaker" (ブロック崩し, Burokku Kuzushi?), one of Nintendo's arcade games based on Atari's Breakout. Like the Color TV Game 6, the in-game paddle was controlled by a dial attached to the system. The system's external design was one of Shigeru Miyamoto's first video-game projects after joining Nintendo in 1977.

The final console in the series was the Computer TV Game (コンピューターテレビゲーム, Konpyūtā Terebi Gēmu?), and it was released in 1980. Like other consoles in the Color TV Game series, it was distributed only in Japan. One of the games in this console was a port of Nintendo's first video arcade game, Computer Othello.

Over two decades after their release, Nintendo would feature Color TV Games in their WarioWare series. WarioWare, Inc.: Mega Microgame$!, released for the Game Boy Advance in 2003, includes a microgame version of Color TV Racing 112, as part of 9-Volt's collection of old Nintendo games. Color TV Game 6 also became a microgame. It was one of 9-Volt and 18-Volt's Nintendo games in WarioWare: Smooth Moves, released for the Wii in 2006.