The Power Player Super Joy III consoles (also known as Power Games and XA-76-1E) are a line of unauthorized handheld Nintendo Entertainment System/Famicom clones manufactured by NRTRADE that are sold in North America, Brazil, Europe, Asia, and Australia. The system resembles a Nintendo 64 controller and attaches to a TV set. The second controller resembles a Sega Genesis controller, and a light gun is also included. NTSC, PAL and SÉCAM versions are available. They all use a custom "NES-on-a-chip" (NOAC) that is an implementation of the NES's hardware (Custom 6502, PPU, PAPU, etc.).

The consoles came with 76 built-in games, although marketing frequently claims to have 1,000+ ways of playing them. Most of the included games were originally released for the NES or Famicom, but some have been created by the manufacturer to expand their list of included games. Most of the games have had their title screen graphics removed to save space on the ROM chip, not to mention a company logo removal trick for reduced liability.

When Nintendo discovered this product, it began taking strong legal action against importers and sellers of the consoles, and have obtained a temporary injunction against the import and sale of video game systems containing counterfeit versions of Nintendo games.

As of spring 2005, NrTrade quit selling these products, although they still retain stock by other companies. These are still in production in China by Eittek but not massively distributed.

On December 16, 2004, the FBI executed search warrants at two kiosks at the Mall of America and also searched storage facilities rented by Yonathan Cohen, 27, an owner of Perfect Deal LLC of Miami, Florida.[1] The consoles, purchased wholesale at $7 to $9 each, sold for $30 to $70 each.[2] After confiscating 1,800 units of Power Player, each containing 76 copyrighted video-game titles belonging primarily to Nintendo or its licensees, Cohen was charged in Minneapolis, Minnesota in January 2005 with federal criminal infringement of copyright for selling Power Player video games at kiosks at the Mall of America and other malls across the nation.[1] In April 2005, Cohen pleaded guilty to selling pirated video games.[2]

In November 2005, Cohen was sentenced to five years in federal prison and required to run ads in mall magazines to tell the public how he illegally sold knockoff video games at Mall of America kiosks.[5]

Several shopping malls quit selling these products, though the product is still sold by other dealers (e.g. flea markets). 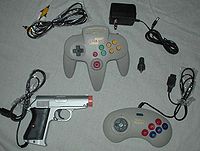