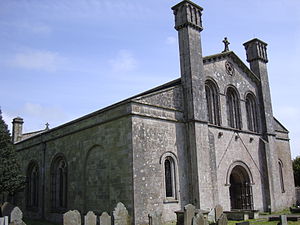 Margam Abbey: the present parish church comprises the nave of the abbey church

Margam Abbey was a Cistercian monastery, located in the village of Margam, a suburb of modern Port Talbot in Wales.

The abbey was founded in 1147 as a daughter house of Clairvaux by Robert, Earl of Gloucester and was dedicated to the Blessed Virgin Mary. The abbey was dissolved by King Henry VIII of England in 1536 and sold to Sir Rice Mansel. At this time, only 12 monks were living in the monastery.

From the Mansel family the abbey eventually passed into their descendants in the female line, the Talbot family. In the 19th century, C R M Talbot constructed a mansion at Margam Castle which overlooks the abbey ruins. The nave of the abbey continued in use as the parish church, as it does to this day.

Margam Abbey now consists of the intact nave and impressive surrounding ruins. Those ruins not belonging to the church are now owned by the County Council. These remains, including the unusually large twelve-sided chapter house, dating from the 13th century, stand within 840 acre (3.4 km²) Margam Country Park, close to Margam Castle.

On a hill overlooking the abbey stand the ruins of an outlying monastery building, Capel Mair ar y Bryn ("the chapel of St Mary on the hill"). The purpose of this building is thought to have been to allow members of the monastic community who were engaged in the keeping of flocks to fulfil their devotional obligations without having to return to the main church.

Two different types of monks lived there and were both equally important in the success of Margam Abbey. First, there was the Cistercian monks, these were the more educated ones - they proved this by writing a book. Secondly there were the lay monks which made the abbey rich by trading in the local area and abroad. They were native Welsh monks and farmers; they traded sheep and the things they farmed.