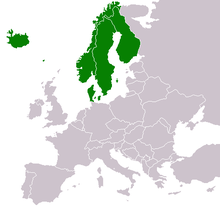 The Nordic Passport Union allows citizens of the Nordic countries: Denmark[2] (Faroe Islands included[3]), Sweden, Norway,[4] Finland, and Iceland[5] to travel and reside in other Nordic countries without a passport or a residence permit.

The Nordic Passport Union was established in three steps. The first step came in 1952, in the form of agreements by the Nordic countries to abolish passports for travel between them and to readmit aliens having entered illegally into one Nordic country from another. The second step was implemented in 1954, when the agreement was extended to allow citizens to reside in any Nordic country without a residence permit. The third step was the removal of passport checks for aliens at internal Nordic borders by a treaty signed July 12, 1957 and coming into force May 1, 1958.

As of 1996, all Nordic countries had joined the larger Schengen Agreement, now comprising 25 countries in Europe.

Before 2001, full customs checks were required for ferry travel when traveling from Denmark to other Nordic countries. There was no land border with Denmark before July 2000 when the Öresund Bridge was opened, which had relaxed customs check from the start. Nordic citizens did not need to be in possession of a passport, but a passport could be useful for those not natively speaking a Scandinavian language. As a part of the customs check, at least when arriving from Denmark and non-Nordic countries, every car driver was asked about where they had been, and suspicious people were subject to further checks. For land and ferry travel into Denmark and between Sweden, Norway and Finland, there were much more relaxed customs and passport checks, and often no checks at all. For air travel, there were full passport and customs checks, even though verbally claiming Nordic citizenship with a Scandinavian language, plus showing the ticket for the intra-Nordic flight, or any Nordic ID card, was usually enough to pass the passport check. It happened that Nordic citizens without a passport were not allowed to pass until a thorough identity investigation had been made, usually for people looking non-Nordic. Passengers traveling by public transport, such as train or air, were usually not interviewed by the customs control.

From March 2001, the Schengen rules have given more relaxed customs checks from Denmark, including no passport checks at airports, since intra-Schengen travelers are separated from the travelers from outside the Schengen area.

Abolition of passport for Nordic citizens

The protocol concerning the abolition of passports for travel between Sweden, Denmark, Finland and Norway[7], was signed on July 14, 1952, in Stockholm.

This protocol was implemented by the individual but concurrent decisions of the four governments. It provided that the need for citizens of the four countries, to carry passports when traveling in the these countries, for such short times that a residence permit was not necessary, was abolished.

The agreement could be revoked in case of war, danger of war, or extraordinary international or national circumstances.

The agreement for the readmittance of aliens[8], was signed on July 14, 1952, in Stockholm.

Exemption of passport or residence permit

The protocol concerning the exemption of nationals of Denmark, Finland, Norway and Sweden from the obligation to have a passport or residence permit while resident in a Scandinavian country other than their own[9], was signed on May 22, 1954 in Copenhagen.

The protocol was implemented by individual but concurrent decisions by the governments of each of the countries, and can be revoked in case of war, danger of war, or other extraordinary international or national circumstances.

Police authorities in the Nordic countries shall make all necessary information available to ascertain a person's identity and citizenship in a Nordic country.

Removal of passport checks at the internal Nordic borders

The agreement between Denmark, Finland, Norway and Sweden to remove passport control at the internal Nordic borders[10], was signed July 12, 1957 in Copenhagen and came into force May 1, 1958.

This agreement removed all passport checks at the internal Nordic borders, and required the Nordic countries to uphold passport control at the external borders. Aliens with residence permits are allowed to stay up to three months in other Nordic countries, except for seeking employment or conducting business.