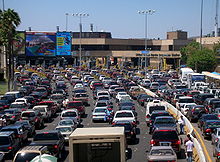 A border checkpoint is a place, generally between two countries, where travellers and/or goods are inspected. Authorization often is required to enter a country through its borders. Access-controlled borders often have a limited number of checkpoints where they can be crossed without legal sanctions. Arrangements may be formed to allow or mandate less restrained crossings (e.g. Schengen Agreement). Land border checkpoints can be contrasted with the customs and immigration facilities at seaports, international airports, and other ports of entry.

Checkpoints are usually manned by a uniformed service (sometimes referred to as customs service or border Patrol Agents).

Italy-Swiss border post - now Switzerland has joined the Schengen Agreement, so this checkpoint is solely for customs formalities

The Schengen Borders Code, which forms part of the law of the European Union, defines some terms as follows (particularities with respect to the EU are left out, in order to emphasize general usability of those definitions):[2]