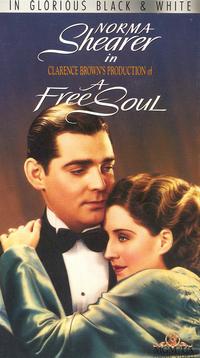 "A Free Soul" (1931) is a film which tells the story of an alcoholic defense attorney who must defend his daughter's ex-boyfriend on a charge of murdering the mobster she had started a relationship with; a mobster whom her father had previously gotten an acquittal for on a murder charge. "A Free Soul" stars , Leslie Howard, and (the first screen appearance together of the future and ).

The movie was adapted by Becky Gardiner and John Meehan (dialogue continuity) from the play by , which was based on the book by . It was directed by .

"" became famous for a 14-minute uninterrupted take where Barrymore delivers a monologue that is said to be the main reason he won the that year. (Norma Shearer was nominated for Best Actress in a Leading Role and Clarence Brown for Best Director.) Gable made such an impression in the role of a gangster who pushes Shearer around that he was catapulted from supporting player to leading man, a position he held for the rest of his career.

"A Free Soul" was released on DVD by Warner Home Video on , (along with "", also starring Norma Shearer), as one of five Pre-Code films in the "TCM Archives - Forbidden Hollywood Collection, Vol. 2" DVD box set.