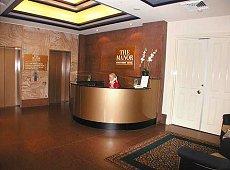 Manor Apartments is located in the heart of Brisbane's CBD, virtually metres away from restaurants, entertainment and the city's premier shopping district, the Queen Street Mall. Situated in a charming, heritage-listed and boutique environment, Manor stands next to Brisbane's General Post Office. Manor Apartment hotel consists of 37 one and two bedroom apartments, all of which are spacious and well appointed. Each apartment has its own fully equipped kitchen.