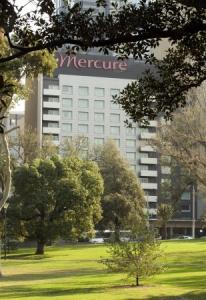 Possessing one of the best CBD locations in Melbourne in a lovely green area, and within walking distance to many of the city's sporting and entertainment venues, the Mercure Hotel Melbourne is perfect for either the business or leisure travellers.

Location
Mercure Hotel Melbourne is located in the heart of the city, near state parliament and overlooks picturesque Treasury Gardens. The hotel is only 20 kilometres from Melbourne Airport and is within walking distance from the Victorian Arts Centre, the Princess or Regent theatres and Chinatown. The property is also in close proximity to Federation Square, the Melbourne Cricket Ground, Rod Laver Tennis Centre and Vodafone Arena.

Rooms
The hotel has 164 rooms offering basic room amenities for a comfortable stay in the city. Most of the rooms have views of either Treasury Gardens or the city's skyline.

Restaurant
Guests can dine at the in-house restaurant that serves a wide variety of cuisine. Later you can take a sip of your favourite cocktail at the on-site bar.

General
The hotel features a conference room for people travelling on business issues, accomodating up to 200 people.