Salesian College is a Roman Catholic Independent school for boys located in the Melbourne suburb of Chadstone. Founded on the philosophies of Saint John Bosco, the college aims to offer a Salesian ideal of education.[1] Salesian has two campuses situated on separate sides of the Monash Freeway - Bosco (Years 7-8 & Years 10-12) being the school's main campus and the Mannix campus, named for Daniel Mannix Campus (Year 9) catering solely for one year level. Salesian is a member of the Associated Catholic Colleges.

The star representing Mary, since Mary means "Star of the Sea", shines on the two hills of the College as a symbol of loving protection. The trees represent wood and thus St. John Bosco, founder of The Salesian Order, as the Italian word for wood is "Bosco". The harp symbolizes Ireland and recalls the Irish extraction of two great benefactors, Archbishop Daniel Mannix and the Moroney family who originally settled the property in 1850. The surmounting Griffin is from the Archbishop's crest. The motto, "Omnia Omnibus", is from the Archbishop's crest too, and also has reference to St. Francis of Sales, Patron of the Salesian Society. The words are taken from St. Paul and mean "To be all things to all" - the epitome of charity.[3]

Throughout years 7 to 10, weekly sporting activities are conducted and compulsory to students in those year levels. The college also offers a number of other sporting clubs, teams, trips and activities. These include: cycling team riding throughout the school year and involved in an annual cycling trip along the Great Alpine Highway; annual skiing trip to Mt. Hotham; canoeing club running throughout the warmer terms; golf team, camping in every year level.

This sporting ethos is heavily embedded in the school life and has allowed the school to compete with many of the larger schools in the ACC.[4]

Salesian has also gone back to the housing system of competitive sport in the school at the beginning of 2007. The four houses compete with each other in many sports, most notably swimming and athletics.

Salesian Old Boys Cricket Club is a cricket club situated at the college. It currently hosts a Juniors Academy and several junior and senior teams. The club currently plays under the Southern Districts and Churches Cricket League.

The Mannix Campus is a special campus, a state-of-the-art facility, dedicated to the education of students in year 9. This campus has a special staff to cater for the boys academic needs. The campus has two ovals, a science lab (only for the year 9s to use), a multipurpose room and a reception of its own.

The four houses since their re-introduction at the start of 2008 are Annecy, Collinson, Moroney and Savio.

The House Cup is awarded each year after the accumulation of all the House Points awarded throughout the year in several Competitions such as debating, athletics, swimming, fundraising and cross-country running. 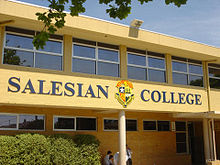 Music is an important aspect of Salesian College life. A host of various styles of bands are offered to the students to suit their needs. These bands will play often throughout the year in many of the college's assemblies, masses, plays and other music activities. The college bands have also been involved in many other major events including: Olympic Torch Relay, The ACC "ACCent on Music" inaugural concert, State Ministerial performances, the College's Annual Dinner Dance, Band Festivals and Eisteddfods. An annual band camp is also held during the year for the students involved. To encourage new students to begin an instrument, a free semester of music tuitions is given as part of the year 7 students curriculum. Once completed, students may elect to continue or change their preferences.

The Bosco program is a unit of study for Year 9 students that educates them about the environment, urbanism, community service and personal development. This gives the students a chance to explore the city and the environment of the community.[5] Every Friday students are taught skills necessary for life, such as using Melbourne's Public transport system. They engage in hands-on activities that the students regard as "fun" and a "wonderful learning experience".

The school has established a number of recreational clubs over the years, including chess, canoeing, drama and cycling, some of which have been in operation for over 20 years.[6]

The Biretta program is a program which was introduced to cater for boys with high intelligence and it caters for them by giving them hard tasks to excersise their minds. It started in 2015 for the first year and is still continuing.