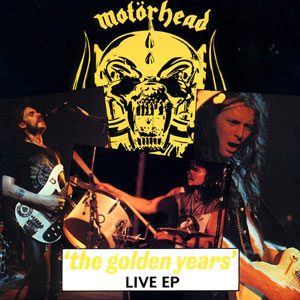 Released = , :"For other uses and meanings of "The Golden Years" see the disambiguation page."

"The Golden Years" is a live EP by the British heavy metal group . Released following the success of their Bomber album, it reached number 8 on the UK charts in May 1980.

There was a distinct lack of radio play for the single, the radio stations claiming the vocals were too low in the mix, so "Leaving Here" was remixed and issued to radio stations as a 12" coupled with "Stone Dead Forever". Despite the lack of radio exposure, on the band managed an appearance on the TV weekly chart show "" to promote it.

This EP is currently available as bonus tracks on the 1979 album "Bomber", and "Leaving Here" was included on the "" compilation album.

The original standard release of this EP was in 7" and 12" vinyl (Bronze Records), some lapses in quality control allowed through a number of copies of the 7" that play Kate Bush on the 'A' side.