North Point State Park is a Chesapeake Bay waterfront park located in Edgemere, MD. The park is situated on the grounds that once were the home of Bay Shore Amusement Park, which was one of the premiere amusement parks in Maryland from 1906 - 1947. Current visitors to the park can enjoy hiking, wading, birdwatching, bicycling, fishing, picnicking, group events, and remnants of Bay Shore Park, such as the restored Trolley Station and fountain. 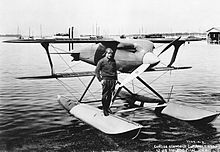 Built in 1906, Bay Shore Park was a major attraction for Baltimoreans who took the trolley out from the city. Evidence suggests that the area on which the park was built was first occupied by humans 9000 years ago. It had been utilized for farming for around three and a half centuries prior to its conversion to parkland. It was also a point of importance during the War of 1812, as it hosted the route to Baltimore traveled by British troops intent on invading the city from the Southeast. Several skirmishes were fought there. In 1925 Jimmy Doolittle won the Schneider Trophy seaplane race held at the park that year.[1] When it was first created, the park held buildings for dining, dancing and bowling. It also hosted a beach, with bathhouse facilities and recreational slides and rides, from which bathers could access the Chesapeake Bay. Various other amenities were added over the years, including several piers.

At its inception, the park could be accessed only by a trolley owned by United Railway and Electric Company, which also owned the park. It remained accessible only by trolley until the 1940s.

The park still hosts piers and provides beach access to visitors, who have been permitted to wade since 1999. There are picnic tables and grills on site. The historical fountain has been restored, as well as the old trolley station, which is used by permit for large gatherings of up to 400 people. The recently built Takos Visitor Center, named in honor of Volunteer Ranger Steve Takos who spearheaded the renovation efforts at the park, was designed to resemble the former hotel and restaurant. It boasts and an educational science room, multiple history and nature-oriented exhibits, including a large saltwater fish tank, and a conference room.