Assault (Danger Zone) is an event played in several incarnations of the television series Gladiators. In this event, a contender must navigate their way across a number of safety stations (each housing their own weapon) aiming for a target located above the Gladiator who is standing on a raised podium with a tennis ball gun, their target being the contender.

One Gladiator faces one contender, with the game beginning with them being opposite sides of the playing course. The Gladiator is on a raised platform armed with a tennis ball gun (normally loaded with 24 tennis balls). On the whistle, the Gladiator has 60 seconds to fire at the contender, the gun releasing the tennis balls at speeds of at least 80mph. A successful direct hit (not a ricochet off the ground, a station or weapon) will signify a Gladiator win and the end of the event. 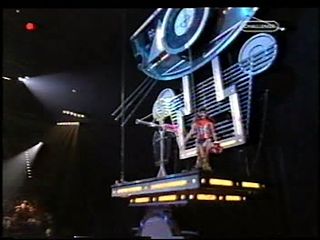 The scoring structure for this event varied over the years, but the general ruling was 1 point for each weapon fired and 10 points for hitting the Gladiators target. A bonus point would be given for completing the course without being hit.

The UK version in this event (named Danger Zone) differed in that after the final safety station (of which there were four), the contenders had to crawl through a perspex tunnel with holes in it to tag a lower target in order to collect the bonus point. In addition, the safety stations would explode at ten second intervals, giving the contenders limited time to fire the weapon. If the safety station exploded before the weapon was launched, then no point would be awarded for that station.

Assault was also played in Finland under the name Kaupunkisota. 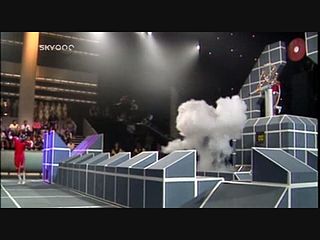 The Assault course from the original series of American Gladiators. Notice the pyrotechnics below the Gladiator Sha-ri "Blaze" Pendleton's platform. It is the large smoking area.

In the first half of series 1, there were four safety stations with the weapons being an air powered rocket launcher, an air-powered ball cannon, a special effects pistol (that fired a glitter shot), and two hand grenades (filled with glitter that exploded on impact) with a two rim target being located to the side of the Gladiator. Should the fourth weapon be fired, then the contender could remain at the final station until time expired to claim 30 points. 60 points (later 75) were awarded for hitting the outer rim and 100 for the inner rim. The contender would begin their run from behind the first safety station. In the first series, the safety stations were a fort, a blown-out building, a bramble bush, and two oildrums. Contenders did not wear any safety equipment other than goggles despite the speed of the Gladiators tennis balls

For the second half of series one, a fifth safety station was added containing a crossbow, and placed at the start of the course, and the safety zones were changed to objects with varying shaps instead of the more realistic safe zones used in the first half of the season. The contender would have to run to the first safety station. The Gladiator target was located to above the Gladiators head and the finish line was added. 4 points would be awarded for crossing the finish line. 7 points were awarded for hitting the outer rim and 10 for the inner rim.

From the third series (1991), 10 points were awarded for hitting any portion of the target. If the contender was not able to hit the target, one point was awarded for each weapon fired, with a bonus point being awarded for crossing the finish line. For portions of the third season, the target was enclosed within a square holding bracket. Only projectiles that made initial contact with the target itself (not the holding bracket) would count as a hit. The weapons changed various times over the years, including in season 5 a complete redesign of the assault set and weapons including the gladiator's cannon.

In the first series of the 2008 revival, the weapon lineup was Slingshot, a cannon in a turret (which needed to be rotated), a sandbox which conained an arrow for station 4 (along with a button which released a smoke screen), and a crossbow. The weapon at the fifth station houses a tube containing three tennis balls which the contender can throw at the Gladiators target. Between the fourth and fifth stations are three small hiding blocks, and another small block was located between stations 2 and 3. After the fifth station, the contender has the chance to earn a draw by running to a stand with a button and pressing it. No contenders so far have been able to reach the button, so the exact scoring for pressing the button has not been determined. All weapons were unloaded, and the contender carried the slingshot projectile with them to the first station.

In the second series of the revival, all weapons except the slingshot were preloaded and the cannon was already rotated into position. The third station now contains a Bazooka.

A successful target hit detonates an explosion on the Gladiator's platform and launches the Gladiator backwards into the water pool. Pressing the button at the end of the course will also cause the same effect as hitting the target.

Danger Zone was played as Event 3 during every show of the first series, but it's appearances declined from the second series (1993) onwards, with the event often being used to allow injured Gladiators to compete or for specials. This was the only Event from Series 1 not to feature in Series 8.

During 1992, the event had its own theme music 'Under pressure' by Queen. This was never shown in the televised shows and the event theme was dropped from 1993.

The second series saw some changes to the event, with the stations being evenly spaced out across the floor with stations 1&3 and 2&4 parallel to each other. Station 4 was moved further from the perspex tunnel. A contender hit would set off a pyrotechnic and lights display (whereas in series 1 the Gladiator on a harness was slowly lifted into the air). A tag on the lower target would earn 5 points as opposed to the 10 awarded during the first series. The music for the event was also changed.

Gladiators wore body armour and goggles for this event with the exception of series 2.

Danger Zone was modified for the junior Gladiators series Train 2 Win. In this modification, the junior contender would stand on the Gladiators platform and fire at the Gladiator who had to run from station to station. Unlike the adult version, the stations did not have any weapons behind them.

Danger Zone did not return for the 2008 revival.