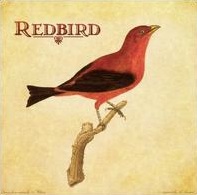 "Redbird" is the title of a recording by , and . All three are artists on the Signature Sounds label and regularly toured together. Foucault and Delmhorst are married. The trio worked out many of the songs on the road allowing them to record the album in a scant three days.