Maria Osmarina Marina Silva Vaz de Lima[1] (born near Rio Branco, in Acre on February 8, 1958) is a Brazilian environmentalist and politician. Ms. Silva was a colleague of Chico Mendes, who was assassinated for defending the Amazon environment.[2] She was a member of the Partido dos Trabalhadores until August 19, 2009 and served as a senator before becoming environmental minister in 2003. In 1996, Ms. Silva won the Goldman Environmental Prize for South & Central America.[3] In 2007, the United Nations Environment Program named her one of the Champions of the Earth[4] and the 2009 Sophie Prize.[5] Running in the 2010 Brazilian elections, she won 19.4% of the popular votes.

In 2010, she along with Cécile Duflot, Monica Frassoni, Elizabeth May and Renate Künast were named by Foreign Policy magazine to its list of top global thinkers[6], for taking Green mainstream.

Ms. Silva is descendent of Portuguese and black African parents on both her maternal and paternal lines.[7] Silva grew up as one of eleven children in a community of rubber tappers on the Bagasse (Bagaço) rubber tree plantation (Portuguese Seringal Bagaço), in the western state of Acre. Orphaned at age 16, young Marina moved to the state capital, Rio Branco, where she received a Catholic education as she worked as a maid. She graduated in history from the Federal University of Acre at 26 and became increasingly politically active. In 1984 Ms. Silva helped create Acre's first workers' union.[8] She led demonstrations called empates with Chico Mendes to warn against deforestation and the outplacement of forest communities from their traditional locations.[9]

Silva as a Senator 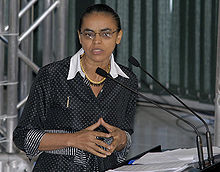 In 1994, Ms. Silva was the first rubber tapper ever elected to Brazil's federal senate. As a native Amazonian and a senator, she built support for environmental protection of the reserves as well as for social justice and sustainable development in the Amazon region.[10] Deforestation decreased by 59% from 2004 to 2007, during which she implemented an integrated government policy. It simultaneously fostered sustainable development, favored territorial zoning, and attached greater value to standing forests. It also incorporated elements from international conventions and documents.[11] “All of this demonstrates that, when there is integrated planning and effort, it is truly possible to change the picture,” Silva said in a statement to the Embassy of Brazil in London.[11]

Member of the Workers' Party, Marina Silva was appointed Brazil's Environment Minister by Lula in his first term (2003). She remained in office until 2008 and received several criticisms of entrepreneurs (mainly related to agribusiness) on account of delays in granting permits for projects with large environmental impact. In early 2005, however, she stated that she would not give up upon facing challenges even if imposed by the government to which she belonged, like when the controversy over the Sao Francisco River Diversion Project happened. [12] and the building of BR 163 highway through the rainforest: "I don't admit defeat, just challenges that must be overcome".[13]

Also in 2005, Silva established the main lines of action for the next two years: social participation, sustainable development, creation of a National Environmental System and an Integrated Environmental Policy. As she said, "Our ministry is new. It's only 13 years old, and it needs to be rebuilt".[13]

In the same year, Silva was confronted by Paulo Adário, coordinator of Greenpeace Brazil, over her environmental actions in her tenure in the ministry. Ever since her tenure began, Ms. Silva, together with the Federal Police, the Brazilian Army and the Federal Highway Police, the Brazilian Environment Ministry performed 32 operations against illegal deforestation in the Amazon. But Adário claims that his organization monitors the Amazon region and that only one of such operations was conducted in October 2004, in the town of Itaituba, Pará. According to him, even if the 32 operations had actually been accomplished, this would represent only half of what was anticipated in the National Plan to Combat Deforestation.[13]

Silva resigned mid-May in 2008. She was replaced by Carlos Minc.[14] Silva cited "the growing resistance found by our team in important sectors of the government and society" as the reason for her resignation.[8] The last straw for her came when President Lula da Silva designated Roberto Mangabeira Unger, the minister for strategic affairs, to coordinate an "Amazon sustainable development initiative" instead of her, who had been reared in the tropical rainforest she sought to preserve. She had become increasingly isolated in Lula da Silva's government due to her views on hydroelectric dams, biofuels, and genetically modified crops.[15]

"It's time to start praying [for the rainforest]," Sérgio Leitão, the director of public policy for Greenpeace in Brazil, said after Silva's resignation.[8]

On August 19, 2009, Silva announced her switch from the Workers' Party to the Green Party, primarily in protest against the environmental policies endorsed by the PT. She has also become a Pentecostal Christian in the Assemblies of God, the second largest Christian denomination in Brazil after the declining but still mainstream Roman Catholic church.

Confirming the expectations,[16] Marina Silva launched her candidacy[17] to the 2010 election under the Green Party ticket on May 16, 2010 in the city of Nova Iguaçu, state of Rio de Janeiro.

Besides belonging to non-mainstream Christianity in Brazil, [18] Silva said she wanted to be "the first African-Brazilian woman of poor origin" to become president of Brazil.[19]

She was eliminated in the first round of presidential voting, receiving 19.4% of the votes cast. This number far exceeded earlier estimates and was responsible for forcing a runoff vote between Dilma and José Serra. [20]