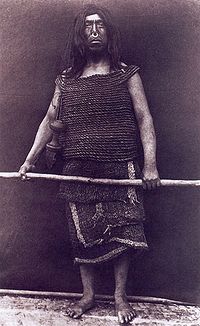 The 'Nak'waxda'xw, also known as the Nakoaktok, are an Indigenous nation, a part of the Kwakwaka'wakw, in the Central Coast region of British Columbia, on northern Vancouver Island. Their main village is now at Port Hardy where they were relocated by government officials from their ancient village Ba'as at Blunden Harbour on the mainland side of the Queen Charlotte Strait. The Indian Act First Nations government of this nation is the Gwa'Sala-Nakwaxda'xw Nation, which includes the Gwa'Sala people, traditionally a separate group.