By far the most famous and visible sites are Hangars #1, #2, and #3, which dwarf the surrounding buildings. Hangar One is one of the world's largest[4]freestanding structures, covering 8 acres (32,000 m2). Hangars #2 and #3 are significant more for their size than their unique styling or design. Hangar One is a Naval Historical Monument and the entire airfield is a historic district listed on the National Register of Historic Places.[5] In May 2008, The National Trust for Historic Preservation listed Hangar One on their list of America's Most Endangered Places.[6]

In 1931, the city of Sunnyvale acquired a 1,000 acre (4 km²) parcel of farmland bordering San Francisco Bay, paid for with nearly $480,000 raised by the citizens of Santa Clara County, [7] then "sold" the parcel for $1 to the US government as a home base for the Navy airship USS Macon.

The location proved to be ideal for an airport, since the area is often clear while other parts of the San Francisco Bay are covered in fog. This is due to the Coast Range to the west which blocks the cold oceanic air which is the cause of San Francisco fog.

The base, originally named Airbase Sunnyvale CAL (it was thought that calling it Mountain View would cause officials to fear airships colliding with mountainsides),[8] was accepted by the U.S. Navy on 12 February 1931 and dedicated NAS Sunnyvale on 12 April 1933. After the death of Rear Admiral William A. Moffett, who is credited with the creation of the airfield,[9] in the loss of the USS Akron on 4 April 1933, the airfield at Naval Air Station Sunnyvale was named Moffett Field on 1 September 1933.

After the ditching of the Macon on 12 February 1935, and until 1942, the Navy transferred claimancy of Moffett Field to the War Department and the installation was under the control of the U.S. Army Air Corps. 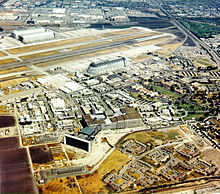 On April 16, 1942, control of the facility was returned to the Navy and it was re-commissioned as NAS Sunnyvale. Four days later it was renamed NAS Moffett Field. From the end of World War II until its closure, NAS Moffett Field saw the development and use of several generations of land-based anti-submarine warfare and maritime patrol aircraft, including the Lockheed P2V Neptune and Lockheed P-3 Orion. Until the demise of the USSR and for some time thereafter, daily anti-submarine, maritime reconnaissance, Fleet support, and various training sorties flew out from NAS Moffett Field to patrol along the Pacific coastline, while Moffett's other squadrons and aircraft periodically deployed to other Pacific, Indian Ocean and Persian Gulf bases for periods of up to six months.

In 1960, the nearby Air Force Satellite Test Center (STC), was created adjacent to (on the SW corner of) NAS Moffett Field. Often referred to as "the Blue Cube," it was operational until 2010 as Onizuka Air Force Station now part of the Air Force Satellite Control Network (AFSCN).

In August 1986 during the NAS Moffett Field Airshow, the Italian demonstration team, Frecce Tricolori, performed as well as the German jet team[citation needed], the Vikings, in front of the crowd.

On 1 July 1994, NAS Moffett Field was closed as a naval air station and turned over to the NASA Ames Research Center. NASA Ames now operates the facility as Moffett Federal Airfield. Since being decommissioned as a primary military installation, part of Moffett has been made accessible to the public, including a cordoned portion of the interior of the massive Hangar One. There were once balloon rides given on show days, and incidents of weather inside.

Moffett Federal Airfield has moderate air traffic, with an average of 5-10 flights landing per day. Moffett is regularly used by the California Air National Guard, NASA, Lockheed Martin Space Systems (commercial satellite manufacturer), the Google founders for their private planes, Air Force One during presidential visits to the Bay Area as well as several other organizations. 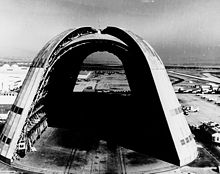 View of Hangar One, the huge dirigible hangar, with doors open at both ends.

Moffett Field's "Hangar One" (built during the Depression era for the USS Macon) and the row of World War II blimp hangars are still some of the largest unsupported structures in the country. The airship hangar is constructed on a network of steel girders sheathed with galvanized steel. It rests firmly upon a reinforced pad anchored to concrete pilings. The floor covers eight acres (32,000 m²) and can accommodate 10 football fields. The airship hangar measures 1,133 feet (343 m) long and 308 feet (93 m) wide. The building has aerodynamic architecture. Its walls curve upward and inward, to form an elongated dome 198 feet (60 m) high. The clam-shell doors were designed to reduce turbulence when the Macon moved in and out on windy days. The "orange peel" doors, weighing 500 tons (511.88 tonnes) each, are moved by their own 150 horsepower motors operated via an electrical control panel.

The airship hangar's interior is so large that fog sometimes forms near the ceiling.[9] A person unaccustomed to its vastness is susceptible to optical disorientation. Looking across its deck, planes and tractors look like toys. Along its length maintenance shops, inspection laboratories and offices help keep the hangar busy. Looking up, a network of catwalks for access to all parts of the structure can be seen. Two elevators meet near the top, allowing maintenance personnel to get to the top quickly and easily.

Narrow gauge tracks run through the length of the hangar. During the period of lighter-than-air dirigibles and non-rigid aircraft, the rails extended across the apron and into the fields at each end of the hangar. This tramway facilitated the transportation of an airship on the mooring mast to the airship hangar interior or to the flight position. During the brief period that the Macon was based at Moffett, Hangar One accommodated not only the giant airship but several smaller non-rigid lighter-than-air craft simultaneously.

A spirited debate is underway over the future of Hangar One. Plans to convert it to a space and science center have been put on hold with the discovery in 2003 that the structure is leaking toxic chemicals into the sediment in wetlands bordering San Francisco Bay. The chemicals originate in the lead paint and toxic materials, including polychlorinated biphenyls (PCBs), used to coat the hangar. Options under debate include tearing down the hangar and reusing the land, and cleaning the toxic waste from the site and refurbishing the hangar for future preservation.

In 2006, an offer to clean the hangar and coat its outsides with solar panels to recoup the costs of cleaning was floated by a private company, but the plan never saw fruition because it was too costly.[10]

In August 2008, the Navy proposed simply stripping the toxic coating from the hangar and leaving the skeleton after spraying it with a preservative.[11] The Navy claimed that to reclad the structure would cost another $15 million and that this is NASA's responsibility. This was regarded as a partial victory by campaigners.[citation needed]

In September 2008, NASA indicated that it was still urging the Navy to restore the hangar, but that it is willing to help save the structure; in particular, NASA is in favor of re-covering the structure at the same time as it is stripped.[12]

In April 2011, the exterior panels began coming down, starting at the top.

An episode of the Discovery Channel TV show MythBusters used one of the smaller hangars to disprove the myth that it is not possible to fold a sheet of paper in half more than seven times. The sheet of paper covered nearly the full width of the airship hangar. Other episodes of Mythbusters have utilized the hangar to test myths such as "Inflating a football with helium allows longer kick distances" and "Airworthy aircraft can be constructed of concrete."

Despite its closure as an active military base, Moffett Field still has many active facilities and residents. Active military families still live on Moffett Community Housing, and the former base has several lodges which primarily house academics and students associated with the Ames Research Center. Moffett Field's facilities available to residents include a pool, post office, golf course, and tennis courts.

Many of the buildings at Moffett Field which once supported its active military presence have been abandoned and left standing due to asbestos contamination within the structures[citation needed].

Moffett Field is an active airfield, and has two active runways:

Moffett Airfield is home to the private jet owned by Google founders Larry Page and Sergey Brin. They pay $1.3 million a year to park their customized wide-body Boeing 767-200 and two other Gulfstream V jets owned by Google executives at the airfield, which is generally closed to private aircraft.[13][14] The airplanes have had scientific equipment installed by NASA to allow for experiments to be run in flight.

Community opposition to the use of the airfield for private purposes has blocked previous deals, including opening the field up to FedEx Express and UPS Airlines in the 1990s. Until 2008 only two other private groups—Lockheed Martin and Jon Stark, a helicopter operator—had use of the airfield.

In October 2008 the first Zeppelin airship to offer private flights in the United States since 1937's Hindenburg disaster became available for tours of the Bay Area and beyond. The 246-foot (75 m) craft, operated by Airship Ventures, is housed in Hangar Two,[15] was built in Germany and is the fourth modern airship constructed and the third to be put in public service. It was dedicated and given the name Eureka at the celebration of Moffett Field's 75th anniversary.[8][16]

Moffett Field has been proposed as the site of the 2020 World's Fair. Governor Arnold Schwarzenegger announced California's bid to host the 2020 international exposition in Silicon Valley while visiting Expo 2010 in Shanghai, China, on September 11. At that time, he revealed Moffett Field as the location for the event, if California won the bid to host.[17]

This article incorporates public domain material from websites or documents of the National Park Service.