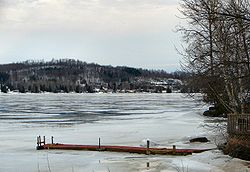 East Ferris is a township in northeastern Ontario, Canada located between Trout Lake and Lake Nosbonsing in the District of Nipissing. West Ferris has long been annexed into the city of North Bay.

The main communities within East Ferris are Astorville and Corbeil. There are also smaller residential areas in the township, known as Derland Road and Lake Nosbonsing.

In July 2005, Astorville hosted the first Northern Ontario Ball Hockey Championship.[1][2] In November 2005, Astorville was one of nine communities that voted on whether to accept private funding for a health centre.[3]

Corbeil is located on the La Vase River, at a turn in Highway 94 south of its terminus at Highway 17. The township's municipal office is located in Corbeil.

Many residents who live in East Ferris, commute back and forth to the City of North Bay for work and for shopping.

The township's public library is located in Astorville.

A famous store in Corbeil is the "Voyer's Red and White Store". It is presently owned by Mike Voyer but has been in his family for over four generations. In 2005, it underwent renovations to house a small family restaurant. It is called "Leo's Restaurant". Leo was the name of Mike's father. Around Canada Day 2006, an LCBO franchise was awarded to Voyer's. In January 2011 Mr. Mike Voyer sold his store and has now taken a lucky 13 franchise and will house a country style restaurant.

The township holds an annual winter carnival, as well as town picnics in the summer.

The Dionne Quintuplets were born on a farm near Corbeil. Corbeil was also the home of Marie-Louise Meilleur, a supercentenarian who was 117 years old when she died in 1998. She was the oldest living person in the world for the eight months preceding her death, and remains both the oldest verified person in Canadian history and the fifth oldest verified person in the world. She lived at the Nipissing Manor Nursing Home, which was once the mansion that housed the Dionne Quintuplets.