Islas Marías
This article is about the Mexican islands. For the Falkland island known as Isla María, see Bleaker Island. For the Czech card game known as Mariáš which is similar to a German game, see Sechsundsechzig.

The Islas Marías ("Mary Islands") are an archipelago of four islands that belong to Mexico. They are located in the Pacific Ocean, some 100 km (62 mi) off the coast of the state of Nayarit. They are part of the municipality (municipio) of San Blas, Nayarit. As of 2006, the islands are still being used as a penal colony, containing the Islas Marias Federal Prison. 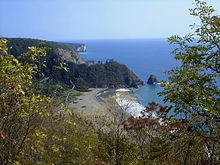 The islands have an aggregate area of 244.970 km². 1116 people lived on Isla María Madre as of the census of 2005. The other islands are uninhabited. The main settlement is Puerto Balleto, with a population of 602.

Isla María Madre, the northernmost island, is the largest, with a surface area of 145.282 km². It houses the Islas Marías Federal Prison which was established there in 1905. The other two islands are Isla María Magdalena (70.440 km²) and, further south, Isla María Cleofas (19.818 km²). They were named after three women called Mary in the Biblical New Testament: respectively, Mary, the mother of Jesus, Mary Magdalene, and Mary, the wife of Cleopas. The smaller island, Isla San Juanito, with an area of 9.105 km² lies off the north coast of Isla María Madre.

The islands are listed from north to south in the following table:

The first European to discover the islands was Diego Hurtado de Mendoza, a cousin of Hernan Cortez in 1532, who gave them the name Islas Magdalenas. He found no evidence of prior habitation by the native americans.

The colony is governed by a state official who is both the governor of the islands and chief judge. The military command is independent and is exercised by an officer of the Mexican Navy.

All populated places of the Islas Marías are on Isla María Madre. They are listed from north to south in the following table:

Each populated center features a different economic activity. The primary population center is Puerto Balleto, the location of the administrative offices and the primary centers of commerce and recreation. It is subdivided into four jefaturas[2]: