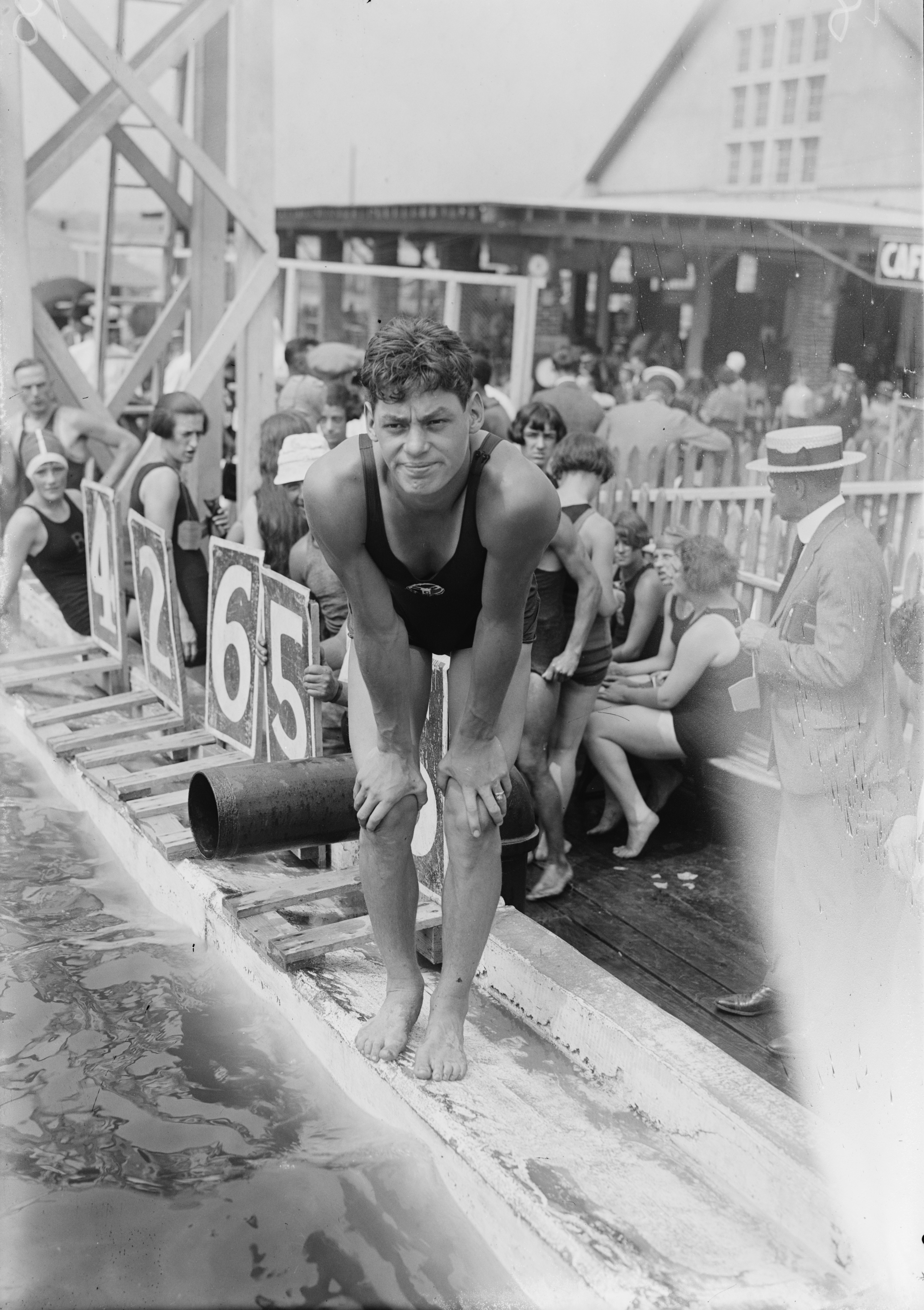 Johnny Weissmuller (June 2, 1904 &ndash; January 20, 1984) was an American swimmer and who was one of the world's best swimmers in the 1920s, winning five Olympic gold medals and one bronze medal. He won fifty-two US National Championships and set sixty-seven s. After his swimming career, he became the sixth actor to portray in films, a role he played in twelve motion pictures. Dozens of other actors have also played Tarzan, but Weissmuller is by far the best known. His character's distinctive, ululating is still often used in films.

Weissmuller was a German, born to Peter Weißmüller and his wife Elisabeth Kersch in what was then part of . The ship's roster from his family's arrival at lists his birthplace as , now a district of , , [cite web|url=http://www.germanhollywood.com/tarzan_myfather1.html|title=Interview with Johnny Weissmuller, Jr.|publisher=germanhollywood.com] [ [http://www.britannica.com/EBchecked/topic/639166/Johnny-Weissmuller "Johnny Weissmuller."] "Britannica Online Encyclopedia".] [cite news |url=http://www.nytimes.com/2007/02/17/world/europe/17briefs-tarzanmonument.html?%20(ex=1172725200&en=a945f654fa0398cc&ei=5070 |title=Serbia: Monument to Tarzan |date=2007-02-17|publisher="The New York Times"] [ [http://www.businessweek.com/globalbiz/content/mar2007/gb20070328_537605.htm?chan=globalbiz_europe_more+of+today's+top+stories "Businessweek report."] ] he was born in the village of Pardanj (today ), in (today , near the Romanian border).

It has been claimed that he was actually named Peter by his parents, but when he arrived in the US he used his brother's name, Johnny, because it was more American. However, the records of St Rochus Church in Freidorf show that János (the Hungarian equivalent of Johann), son of Peter Weissmuller and Elizabeth Kersch, was baptized there on 6 May 1904. The passenger manifest of the "Rotterdam", which arrived in New York on January 26, 1905, lists Peter Weissmuller, a 29 year old laborer, his 24 year old wife Elisabeth, and 7 month old Johann, The family is listed as Hungarian Germans, last residence: Szabadfalu (Hungarian equivalent of ). They were going to join their brother-in-law Johann Ott of . On November 5, 1905, Johann Peter Weissmuller was baptized at St John Cantius Church in Windber. In the 1910 census, Peter and Elizabeth Weisenmuller as well as John and Eva Ott were living at 1521 Cleveland Ave in the 22nd Ward of Chicago, with sons John, age 6, born in "Hun-German" and Peter Jr., age 5, born in Illinois. Peter Weissmuller and John Ott were both brewers, Ott immigrating in 1902, Weismuller in 1904. The ethnic group known as had lived for several centuries in that region and developed a distinctive dialect and cultural traits.

When Weissmuller was an infant, the family emigrated to the United States aboard the "S.S. Rotterdam" as passengers. They left on January 14, 1905, and arrived at in harbor twelve days later as Peter, Elisabeth and Johann Weissmuller. The passenger lists records them as and citizens of Hungary. After a brief stay in , visiting relatives, they moved to the town of . (For most of Weissmuller's career, show business biographies incorrectly listed him as having been born in Pennsylvania. Some sources state that Weissmuller lied about his birthplace in order to ensure his place on the U.S. Olympic swimming team.) Peter Weissmuller worked as a miner, and his youngest son, Peter Weissmuller, Jr., was born in Windber on September 3, 1905. Peter Jr. is listed on one census as born in Illinois.

At age nine, Weissmuller contracted . At the suggestion of his doctor, he took up swimming to help battle the disease. After the family moved from Western Pennsylvania to Chicago, Weissmuller continued swimming and eventually earned a spot on the swim team.

As a teen, Weissmuller dropped out of school and worked various jobs including a stint as a at a beach. While working as an elevator operator and bellboy at the Illinois Athletic Club, Weissmuller caught the eye of swim coach William Bachrach. Bachrach trained Weissmuller and in August 1921, Weissmuller won the national championships in the 50-yard and 220-yard distances. Though he was foreign-born, Weissmuller gave his birthplace as Tanneryville, Pennsylvania, and his birth date as that of his younger brother, Peter Weissmuller. This was to ensure his eligibility to compete as part of the United States Olympic team, and was a critical issue in being issued an .

In 1929, Weissmuller signed a with to be a model and representative. He traveled throughout the country doing swim shows, handing out leaflets promoting that brand of swimwear, signing s and going on s. In that same year, he made his first motion picture appearance as an , wearing only a figleaf, in a movie entitled "". He appeared as himself in the first of several "" movie shorts featuring Weissmuller and other Olympic champions at .

His acting career began when he signed a seven year with and played the role of in "" (1932). The movie was a huge success and Weissmuller became an overnight international sensation. "Tarzan" , , was pleased with Weissmuller, although he so hated the studio's depiction of a Tarzan who barely spoke English that he created his own concurrent Tarzan series filmed on location in Central American jungles and starring as a suitably articulate version of the character.

Weissmuller starred in six Tarzan movies for MGM with actress as Jane and the Chimpanzee. The last three also included as Boy. Then, in 1942, Weissmuller went to and starred in six more Tarzan movies with markedly reduced production values. Unlike MGM, RKO allowed Weissmuller to play other roles, though a three picture contract with led to only one film, "Swamp Fire", being made, co-starring . Sheffield appeared as Boy in the first five features for RKO. Another co-star was Brenda Joyce, who played Jane in Weissmuller's last four Tarzan movies. In a total of twelve Tarzan films, Weissmuller earned an estimated $2,000,000 and established himself as what many consider the definitive Tarzan. Although not the first Tarzan in movies, (that honor went to ), he was the first to be associated with the now traditional ululating, yodeling Tarzan yell. (During an appearance on television's "" in the 1970s, Weissmuller explained how the famous yell was created. Recordings of three vocalists were spliced together to get the effect - a , an , and a hog caller).

When Weissmuller finally left that role, he immediately traded his loincloth costume for a and for the role of "Jungle Jim" (1948) for Columbia. He made thirteen Jungle Jim films between (1948) and (1954). Within the next year, he appeared in three more jungle movies, playing himself. In 1955, he began production of the "Jungle Jim" adventure series for , a film subsidiary of Columbia. The show ran for twenty-six episodes, which subsequently played repeatedly on network and syndicated TV. Aside from a first screen appearance as Adonis and the role of Johnny Duval in the 1946 film "Swamp Fire", Weissmuller played only three roles in films during the heyday of his Hollywood career: Tarzan, Jungle Jim, and himself.

In the late 1950s, Weissmuller moved back to Chicago and started a swimming pool company. He lent his name to other business ventures, but did not have a great deal of success. He retired in 1965 and moved to , where he was Founding Chairman of the .

Sometime in the 1960s, Weissmuller built a doomed tourist attraction called , aka , on US 1 in . In September 1966, Weissmuller joined former screen Tarzans and to appear with as part of the publicity for the upcoming premiere of the " Tarzan" TV series. The producers also approached Weissmuller to guest star as Tarzan's father, but nothing came of it.

Weissmuller lived in Florida until the end of 1973, then moved to , where he worked as a greeter at the MGM Grand Hotel for a time. In 1976, he appeared for the last time in a , playing a movie crewman who is fired by a movie mogul, played by , in "Won Ton Ton, the Dog Who Saved Hollywood", and he also made his final public appearance in that year when he was inducted into the Body Building Guild Hall of Fame.

In 1974, Weissmuller broke both his hip and leg, marking the beginning of years of declining health. While hospitalized he learned that, in spite of his strength and lifelong daily regimen of swimming and exercise, he had a serious heart condition. In 1977, Weissmuller suffered a series of strokes. In 1979, he entered the in for several weeks before moving with his last wife, Maria, to , the location of his last Tarzan movie.

On January 20, 1984, Weissmuller died from at the age of 79. [cite book |last=Sisson |first=Richard |coauthors=Zacher, Christian; Cayton, Andrew Robert Lee |title=The American Midwest: An Interpretive Encyclopedia |publisher=Indiana University Press |date=2007 |pages=902 |isbn=0-253-34886-2] At his request, he was buried in Acapulco, at the Valley of the Light Cemetery, where, also at his request, a recording of the Tarzan yell he invented was played.

His former co-star and movie son, , wrote of him, "I can only say that working with Big John was one of the highlights of my life. He was a Star (with a capital "S") and he gave off a special light and some of that light got into me. Knowing and being with Johnny Weissmuller during my formative years had a lasting influence on my life." [cite book |last=Weissmuller |first=Johnny, Jr. |coauthors=Weissmuller, Johnny; Reed, William |others=Burroughs, Danton |title=Tarzan, My Father |publisher=ECW Press |date=2002 |pages=83 |isbn=1-550-22522-7]

For his contribution to the motion picture industry, Johnny Weissmuller has a star on the at 6541 Hollywood Boulevard in Hollywood.