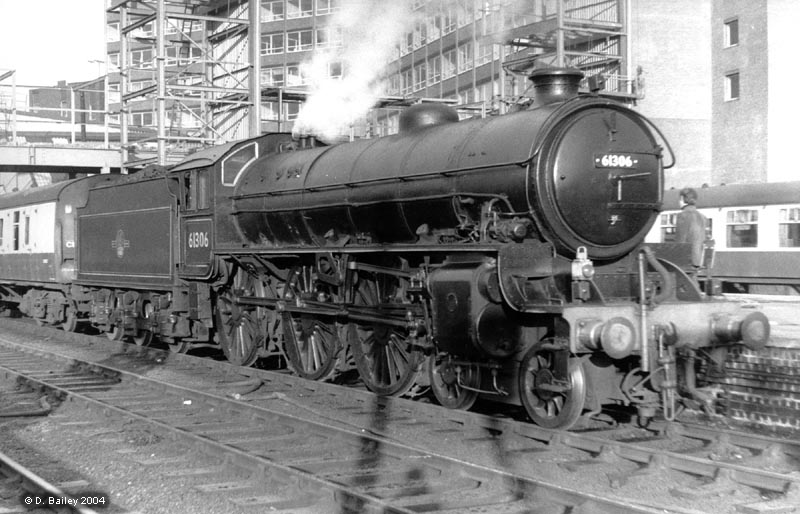 It was the LNER's equivalent to the highly successful and the , a two-cylinder mixed traffic . Introduced in , the first 8301, was named "Springbok" in honour of a visit by . The first 40 of the class named after breeds of antelopes and the like, and they became known as bongos after 8306 "Bongo". 274 were built by the LNER. 136 were built by British Railways after nationalisation in . The total number in stock at any one time however was only 409 as 61057 crashed in and was scrapped.

The prototype for the new B class (Later classified B1) 4-6-0 was built at Darlington and entered service on the 12th of December 1942. It was the first 2 cylinder main-line locomotive constructed for the LNER since the grouping, such had been 's faith in the 3 cylinder layout. With cost saving a wartime priority the LNER's draughtsmen went to great lengths to re-use existing patterns, jigs and tools to economise on materials and labour. Extensive use was made of welding instead of steel castings. The boiler was derived from the Diagram 100A type fitted to the Sandringham 4-6-0s but with a larger grate area and an increase in boiler pressure to convert|225|psi|MPa|2.

The appearance of No.8301 (subsequently renumbered No.1000) coincided with a visit to Britain by the Prime Minister of South Africa, Field Marshal , and, as mentioned above, was named Springbok. 18 other B1s took the names of LNER directors. Not that there were many B1s to be named during the war years; constraints on production meant that the first ten were not completed until 1944. However, Thompson then placed substantial orders with two outside builders: and the of . Between April 1946 and April 1952 NBL built 290 B1s. Over the period the cost of each engine rose from £14,893 to £16,190. Vulcan Foundry contributed 50 at £15,300 apiece. Orders for the B1s, which became Nos.61000-61409 under British Railway auspices, totalled 410.

The B1s operated throughout LNER territory; the first batch was distributed among depots on the former section: , , and in . They were an immediate success and were soon working the - Harwich boat trains, the "Hook Continental" and the "Day Continental". B1s were also a familiar sight on other top-link workings such as "The East Anglian", "The Broadsman" and "The Fenman". During the 1950s over 70 B1s were stationed on ex-GE lines.

They enjoyed similar popularity on ex-Great Northern and Great Central territory with engines based at Darnall, Sheffield, regularly rostered for the "Master Cutler" and "South Yorkshireman" expresses. Elsewhere there were substantial allocations in , West and on .

If any faults were to be highlighted on the B1, it must be the ride quality. O.S. Nock, the famous railway author, often criticised the B1s for a poor ride, not somehting many were used to on the Gresley engines. The B1 was very cheap to build, but the final result was an engine that was somewhat lacking in the quality the LNER men had come to expect. The Two Cylinder layout gave the engines good starting power and excellent hill climbing abilities, but it also caused very bad hunting effects, a result of the use of cut-offs of up to 75% (a 10% advance on Gresley engines), and as such they were less kind on the passengers they carried than the B17's they replaced.

Overall however, it was entriely necessary that the B1s be introduced. The LNER was operating a high number of engines that were well past their economic life, even if it did mean many of them were lost before the preservation movement began. It was somewhat ironic that the engines that came under threat with the arrival of the B1s were the ones that Thompson admired the most: the engines of the North Eastern Railway (those of his Father-in-Law).

Sadly, with the change in the policies of British Railways, the B1s were withdrawn long before their projected economic working life. The first to be withdrawn was No.61085 in November 1961. Officially the whole class was rendered extinct in September 1967. Two were saved for preservation. See below for more information.

Apart from 61057, the rest were withdrawn between and .

Early B1s were named after species of , whilst later engines were named after directors and board members of the . This lead to the fact that the B1 class contained the shortest name given to a British locomotive (#1018 'Gnu') and one of the longest (#1221 'Sir Alexander Erskine-Hill').

:"Note this does not include all engines

Two have been preserved
*No.61264 which was the only LNER locomotive to be sent to Barry Scrapyard and was the 83rd engine to leave the scrapyard. the Engine had been retired from service, but was stayed execution at that time to be used instead as a stationary steam plant, this prolonged its life beyond all but one of its classmates. when the engines working days had finally ended, it was sold to Barry Scrapyard, and preserved within the decade. preserved yes, but restored no, the boiler and firebox were in such poor condition that a new boiler and firebox seemed the only option, but steady work during the 1980's and 1990's brought the orignal boiler 'back from the dead', and the completed engine moved under its own power in 1997, resplendidt in LNER Apple green as no. 1264. It is currently in BR Black livery as 61264. It has now been withdrawn from service (mid 08) for a 10 year overhaul.
*No.61306 "Mayflower" is on the in inauthentic LNER apple green livery and named "Mayflower", a name it never carried in service, though scrapped sister engine 61379 was so named.