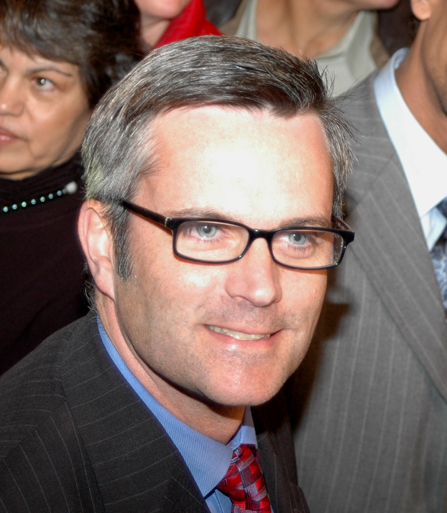 Sam Adams is a city council member and mayor-elect of . In 2004 he was elected to the Portland City Council, defeating attorney Nick Fish. He won the race for Mayor of Portland in the May 2008 election, [cite news| url=http://www.oregonlive.com/special/index.ssf/2008/05/mayor.html | title = Adams wins Portland mayor race | work= | date= 2008-05-21]

Adams was born in 1963, when his family lived on a ranch eight miles outside of . At the age of two, his family moved to for a year, and then on to and , where his parents got divorced. Adams lived with his mother, who survived for a time on .

Adams began his career in politics as a staffer on 's 1986 campaign for the U.S. House of Representatives in Oregon's 4th district.

In a 2004 election for a seat on the Portland City Council, Adams won significantly fewer votes than rival Nick Fish in the , but defeated Fish in the . Following the primary, Adams shifted campaign managers and tactics from a focus on traditional fundraising to grassroots outreach. Adams appeared in the news by standing on street corners waving at citizens with a sign that read, "Honk for the Wonk." The sign was a response to Fish, who dismissed Adams as a "wonk" who knew too much about local government.Fact|date=March 2008

Adams is Portland's Commissioner of Public Utilities; he runs the Portland Office of Transportation (commonly abbreviated as "PDOT") and the Portland Bureau of Environmental Services (BES). He also serves as Portland City Council's liaison to the Arts and Culture and Small Business communities. As part of managing PDOT, he inherited the responsibility to oversee development of the , one of the world's few urban aerial trams. It links the district to the upper campus of . During its development, the project was plagued with controversy due to poor cost estimates. When Adams assumed responsibility for PDOT and, consequently, control of the project, he replaced the external consultants responsible for the poor cost estimates with in-house expertise. The project was completed on time and revised budget, and is fully operational. It opened to the public on , .

Adams and his staff maintain a highlighting their activities in the community, especially pertaining to Adams' priorities such as arts & culture, livability & environment, and transportation. [ [http://www.commissionersam.com Commissioner Adams' blog] ]

On , , Adams announced his intentions to run for Mayor of Portland. [cite web | first = James | last = Mayer | title = Sam Adams says he's running for Portland mayor | publisher = | date = 2007-10-03 | url = http://blog.oregonlive.com/breakingnews/2007/10/sam_adams_says_hes_running_for.html | accessdate = 2008-03-28 ] He officially kicked off his campaign at the Wonder Ballroom in Northeast Portland on , . [ [http://samforpdx.com Sam Adams for Mayor] ] His main opponent in that race was , a civic leader and businessman, although in total thirteen candidates filed for mayor.

The primary election was held on ,. Despite the large field, Adams captured 58 percent of the vote and was therefore elected without the need for a run-off in November.

Adams is the first openly member of Portland's City Council;