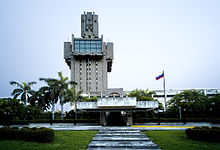 Embassy of Russia in Havana

Cuba-Russia relations (Russian: Российско-кубинские отношения, Spanish: Ruso-Cubano Relaciones) reflect the political, economic and cultural exchanges between Cuba and Russia. These countries have had close cooperation since the days of the Soviet Union. Russia has an embassy in Havana and a consulate-general in Santiago de Cuba. Cuba has an embassy in Moscow and an honorary consulate in Saint Petersburg.

Cuba and the Soviet Union

Cuba and the Russian Federation

Since the fall of the Soviet Union in 1991, Cuba and Russia have maintained their diplomatic relations. After Vladimir Putin came to power in 2000, relations between both countries increased. In December 2000, Putin visited Cuba and he along with Fidel Castro called for the lifting of the embargo on Cuba. Russia is still Cuba's leading creditor and the two countries maintain close economic ties with each other. Cuba strongly supported Russia's position in the 2008 South Ossetian war. In the fall of 2008 Cuba and Russia increased joint cooperation with each other in the field of economics. Russian deputy Prime Minister Igor Sechin visited Cuba several times in 2008 in order to increase economic and political ties. Russia was the first country to provide aid to Cuba after three hurricanes devastated the country in the fall of 2008. The assistance provided by Russia included four planes of food, medical supplies and construction supplies.

In November 2008, Russian President Dmitry Medvedev visited Cuba to strengthen economic ties and to allow Russian companies to drill for oil offshore in Cuban waters, and to allow Russian mining companies to mine nickel in Cuba. [1] Raul Castro traveled for a week long visit to Moscow from January 28, 2009 to February 4, 2009. The talks included $20 million worth of credit to Havana, and 25,000 tons of grain as humanitarian aid to Cuba.[2]

In July 2009 Russia began oil exploration in the Gulf of Mexico after signing a deal with Cuba. Under the new agreement, Russia has also granted a loan of $150m to buy construction and agricultural equipment.[3]