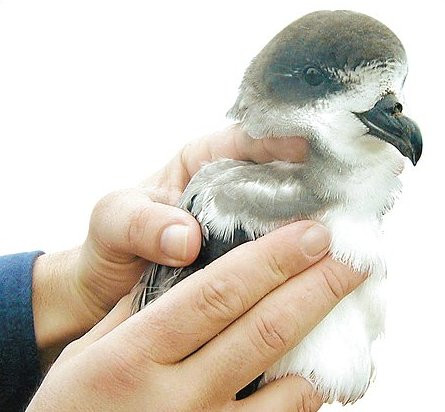 Commonly known in as the Cahow, a name derived from its eerie cries, this ground-nesting is the national bird of Bermuda, and a symbol of hope for conservation. It was thought for 330 years. Its dramatic rediscovery as a "Lazarus species", that is, a species found to be alive after being considered extinct for centuries, has inspired documentary .

Initially superabundant throughout the , the Cahow is a slow breeder, but excellent flier, and spends its life on the open s. At five years old it returns to its former nesting place and begins breeding, laying only one egg per season. Cahows mate for life.

The Cahows' eerie cries stopped the early Spanish seafarers settling the Islands out of superstition, as they thought the Isles were inhabited by Devils. Instead they put ashore hogs as a living foodstore for passing ships, and so began the onslaught on the Cahow's existence. Following Bermuda's colonisation by the English, introduced species like , and , and mass killings of the by early colonists decimated numbers. Despite being protected by one of the world's earliest conservation decrees, the Governor's proclamation "against the spoyle and havocke of the Cohowes," the birds were thought to have been driven to since the 1620s.

In , 18 surviving nesting pairs were found on rocky in Castle Harbour, and a program was set up by to build concrete s and wooden bafflers for the nesting s in order to keep out the slightly larger, competing 'Bermuda longtail', and to restore the nearby Nonsuch Island to be a future viable base for the .

Enjoying legal protection, the species has started to make a good recovery, The main threat for the future is lack of suitable breeding habitat. destroyed many nesting burrows in , and recently the larger and ecologically-restored Nonsuch Island is being repopulated with chicks, their translocation timed so they will imprint on these surroundings. [http://www.birdlife.org/news/news/2008/03/Bermuda_Petrel.html] This work is being undertaken by the present Bermuda Conservation Officer assisted by the petrel specialist Nick Carlile. Nonetheless, the global population of this bird in was only about 250 individuals.

* Database entry includes justification for why this species is endangered